Hives breaks through with Canberra win 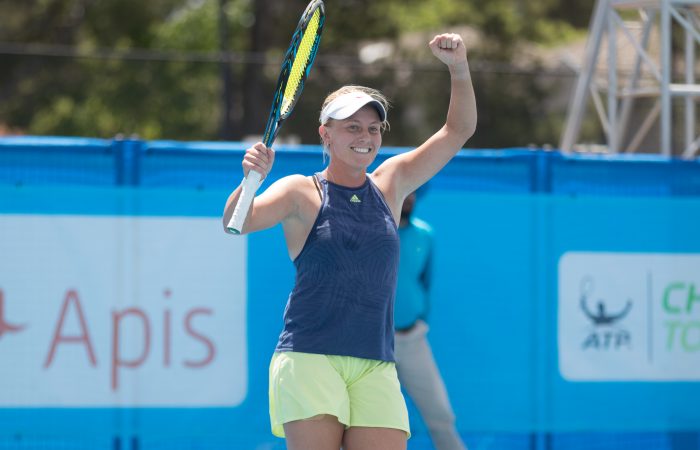 “I’m just really excited I won,” Hives, 22, said. “Heading into the week I wasn’t feeling it that great out there so I’m happy I managed to pull through.”

The Victorian faced a match point against Naiktha Bains in the quarterfinals but recovered and then seized the opportunity to move into Sunday’s final, which she dominated 6-4 6-2.

“That could have been it right there,” Hives said of the Bains match. “I got through a few tight ones, but today it all came together and I played really well.”

Hives played smart in the final, dictating proceedings with her forehand and leaving Rogowska, the fourth seed, with few answers.

“She’s won a few of these kinds of things and she’s got that experience, so to be able to beat her, it’s great,” Hives said of the pair’s first encounter. “I really wasn’t expecting it, so I think it will take a little while to sink in, but I definitely feel like I belong at this level now.”

Following her recent success on the Australian Pro Tour, which included taking the title in Toowoomba, the world No.269 will begin a training block before competing at the Australian Open Wildcard Play-off in December.

“It’ll be good just to have a few weeks to sort out a few little things (injuries) and get ready for a big summer,” she said.

“I don’t have many points to defend now, so it’s a good position to be in.”

In another all-Aussie affair, top seeds Ellen Perez and Arina Rodionova continued their good form of late, edging out No.3 seeds Destanee Aiava and Naiktha Bains 6-7(5) 6-3 [10-7] to claim the doubles title on Saturday.

It is the fourth doubles title in 2018 for Perez and Rodionova as a duo.