Kokkinakis: “I’m just trying to get myself going again”

After winning his second Challenger title of 2018 in Las Vegas, Thanasi Kokkinakis discusses his desire to rise in the rankings again - and he's not averse to grinding it out on the Challenger tour to make that possible. 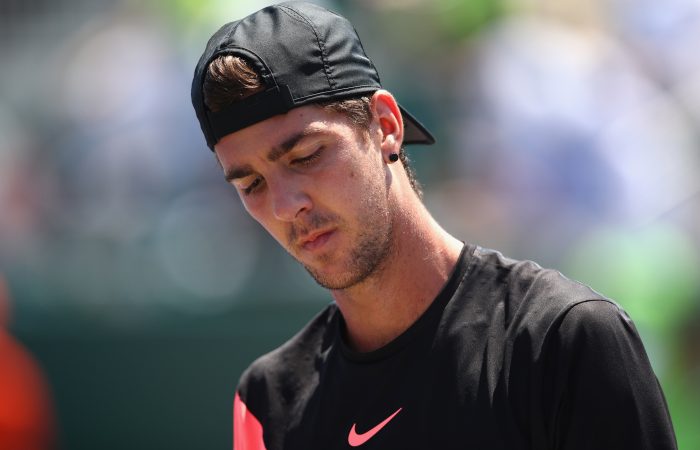 For Thanasi Kokkinakis, the past couple of seasons have been more about surviving than thriving.

Frequently battling injury, the Aussie has gone almost three years outside the top 100, down from a career-high ranking of No.69 he set in June 2015.

But in 2018, he’s turned something of a corner. Challenger titles in Aptos, California and Las Vegas, Nevada have delivered him his first singles trophies of any kind in three years, and have given him a much-needed dose of court time and match wins.

“The biggest issue for me has been staying on the court and actually playing tournaments – it’s hard to improve your ranking if you don’t play tournaments,” he told atpworldtour.com after his victory at the weekend in Las Vegas.

“It means a lot (to win these titles). I hadn’t won one in three years. A lot of that is to do with injury.

“I’m just trying to get myself going again, get back to where I think I belong, and just keep pushing. These victories in Challengers are just as important to the big ones you get on tour, because this is all the hard work that gets done before that.”

The list of injuries is long. The shoulder was the first and the most serious, requiring surgery in December 2015 and sidelining him for almost a year to completely derail him of momentum.

Subsequent injuries – pectoral, abdominal, ankle and knee – continued to interrupt his progress. The knee was particularly galling; he suffered a hairline fracture and deep bruising in his knee cap after tripping over an advertising hoarding mid-point in Monte Carlo.

There have been bright spots, like his first-round win over world No.6 Milos Raonic at Queen’s in 2017, his trip to the ATP Los Cabos final a few months later, and his stunning upset of Roger Federer earlier this year in Miami.

“I know when my game’s at the top level, I can go with anyone,” said Kokkinakis, currently ranked No.154.

“I’ve gotta keep working and do it the hard way a little bit. And that’s what I’ve been doing – I’ve shown that I’m not against coming back to Challengers and building up my ranking. That’s what I need to do.

“I’ve just got to keep working and get this thing done myself and with my team, and keep my head down and trust the process.”