Ash Barty recovered from a slow start to win her second match in as many days in Wuhan, while Daria Gavrilova joined her in the last 16. Matt Ebden won his first-round match in Chengdu. 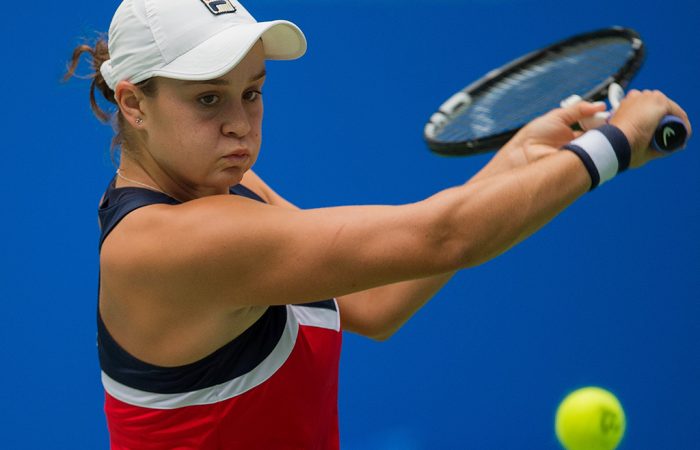 Ash Barty came through a tough encounter against local Zheng Saisai to set up a third-round clash with Angelique Kerber at the WTA Wuhan Open.

And she was not the only Aussie enjoying a winning day in China.

Later on Tuesday, Daria Gavrilova won her second straight match at the $2.75 million tournament thanks to a straight-sets dismissal of Czech Barbora Strycova.

At the ATP Chengdu Open, Matt Ebden brushed Evgeny Donskoy aside 6-3 6-4 to join compatriot Bernard Tomic in the second round.

Barty settled impressively after dropping the first set, winning 4-6 6-1 6-2 to advance to the last 16.

The win comes a day after she beat former world No.4 Johanna Konta in straight sets to kick off her campaign at the Premier 5 tournament in China.

Kerber advanced to the third round after opponent Madison Keys retired injured when trailing 6-0 4-1.

She and Barty have already met once this year, with the German claiming the honours with a 6-4 6-4 win in the Sydney International final in January.

Gavrilova, meanwhile, continued her excellent run in Wuhan, following her upset of 10th seed Jelena Ostapenko in round one with a strong showing against the world No.25.

The double faults which have plagued her throughout 2018 were barely a factor; Gavrilova committed just three and landed more than three quarters of her first serves during the near two-hour contest.

Next up for the Melburnian is wildcard Wang Qiang, who surprised No.8 seed Karolina Pliskova in three sets.

Barty and Gavrilova will both feature on Centre Court on Wednesday, with Barty opening the day’s play against Kerber while Gavrilova is the third match on court against Wang.

His victory moves him through to a second-round meeting with either Italy’s Matteo Berrettini or Indian qualifier Prajnesh Gunneswaran.