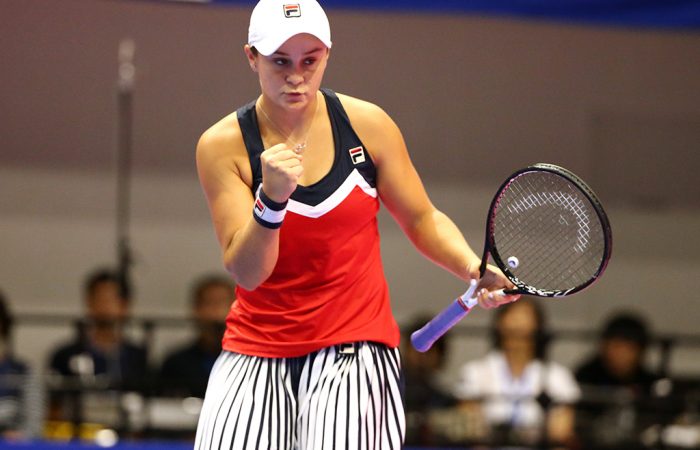 Ash Barty won through to the second round of the WTA event in Tokyo with a hard-fought victory over CoCo Vandeweghe.

Barty eventually subdued the American 4-6 6-3 7-5 to progress, and could meet Victoria Azarenka next should the former No.1 beat fellow wildcard Kurumi Nara.

In Seoul, two other Australians, Ajla Tomljanovic and Priscilla Hon, emulated Barty in coming back from a set behind to win their opening-round matches.

Tomljanovic beat No.5 seed Alison Van Uytvanck, who at world No.39 is the highest-ranked player Tomljanovic has beaten in 2018. Belgium’s Van Uytvanck led 5-3 in the third set before Tomljanovic won 3-6 7-5 7-5.

She next faces Tamara Zidansek of Slovenia for a place in the quarterfinals.

Hon, meanwhile, beat Korean wildcard Su Jeong Jang 3-6 6-2 6-2, taking her winning streak at the tournament – where she reached the quarterfinals last year – to three matches after winning through the qualifying rounds.

In the second round, Hon will face Luxembourg’s Mandy Minella.

Barty, who combined with Vandeweghe to win her first Grand Slam doubles title at the US Open just two weekends ago, said it was hard to face a friend.

“Especially straight after (that result),” she said. “We were both celebrating our victory at the US Open and quickly went home before coming here.

“It’s always tough playing CoCo but I know that we respect each other to play as hard as we can and the best person on the day will come out on top.”

"I knew I had to be clear, aggressive. Play my game and try to get those last couple of points." @ashbar96 on closing out the match #東レppoテニス pic.twitter.com/3EBq7Dy078

After dropping the first set, Barty began to turn the tide early in the second, with a return winner helping her on her way to a break for a 3-1 lead.

With games going on serve in the third, Vandeweghe’s game dissolved into errors, and Barty broke for a 5-4 lead.

Although she failed to serve out the match the first time, she promptly broke again in the 11th game and closed out the match at her second attempt.

While both players finished with 25 winners, Barty kept her unforced error tally to 30 compared with Vandeweghe’s 46.

“I knew I had to be clear, aggressive, play my game and try and get those last couple of points,” Barty said.

Barty joins fellow Australian Daria Gavrilova in the second round in Tokyo; Gavrilova on Monday beat Kristyna Pliskova and will face No.4 seed Karolina Pliskova for a place in the quarterfinals.

In Guangzhou, Aussie qualifier Lizette Cabrera began strongly before falling to Andrea Petkovic 1-6 6-3 6-3 in the first round.