Novak Djokovic is pushed hard by John Millman in a near-three hour slugfest before the former champion prevails in their US Open quarterfinal. 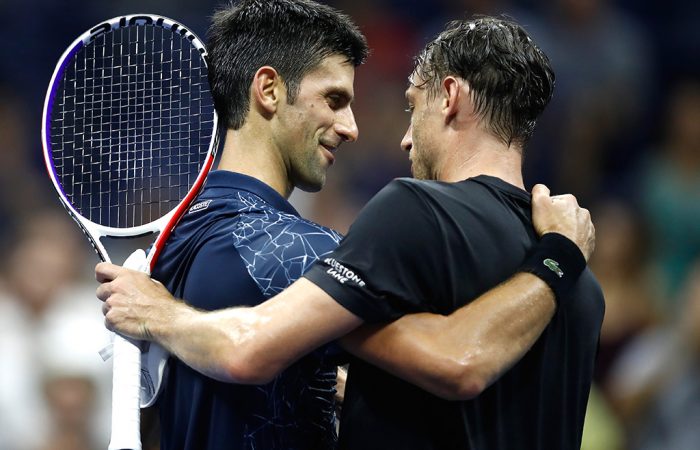 Djokovic downed Millman 6-3 6-4 6-4 in a dramatic war of attrition to end the unseeded Australian’s gallant run, reaching his 11th semifinal in New York in the process.

“These night matches, the humidity goes through the roof,” said Millman after another punishing New York night.

“You’re dripping. But that’s no excuse or anything. I’d play in a swimming pool if I got to play a quarterfinal every week at a Grand Slam.”

The reigning Wimbledon champion and 13-time major winner’s victory vaulted him into a last-four meeting on Friday with rejuvenated 2014 runner-up Kei Nishikori.

The sixth seed was full of praise for the Australian, who had stunned world No.2 Roger Federer in the previous round.

“(I was) very tested. Almost three hours. It’s midnight now. Credit to John for putting up a great battle,” Djokovic said on court.

He took down @rogerfederer, but @DjokerNole proved too good for @johnhmillman, defeating him in straight sets at the #USOpen. @kinson88 has the details. @usopen #9News pic.twitter.com/zelIGj9JoK

“He’s a truly great fighter … he’s had an amazing tournament, first quarterfinals, he won against Roger a couple of nights ago. To come out after that kind of win and fight here for three hours, he deserves a round of applause, definitely.

“(At net we shared) respect for each other. I’ve played him only once in my career, a month ago in London on grass (at Queen’s Club).

“I’ve known him, he’s been around for quite a few years and he’s been known around the tour as a guy with a hard-working ethic and you can see that – he fights for every point and he’s never going to hand you the win.

“He played an amazing tournament.”

In that match at Queen’s, Djokovic allowed Millman just three games in a straight-sets clinic.

But this time around at Flushing Meadows, Millman made the match much more physical and gruelling. He was at his best when down, saving 16 of the 20 break points he faced throughout the match.

“You’ve always got to raise that bar and I’ve had a taste of it and I’d love to have a bit more of a feed,” Millman said.

“I definitely think I can build off this and hopefully finish off the year really well and then look forward to the most exciting time for an Australian tennis player in the Australian Open.

“I’d love to be seeded at one of these tournaments. That’s the next milestone. I can match it with these guys (so) you build a bit of confidence.”

The first set alone lasted exactly one hour, with the Queenslander saving four break points in a marathon sixth game that, if converted, would have seen Djokovic move ahead 5-1.

Just to clarify the change of attire situation, Millman didn't ask to go off, he was told to. He wasn't too keen because he felt he had momentum but accepted the reason.

Instead, Millman remained within touching distance of Djokovic for much of the match.

Such was his exertion in the humid conditions that Millman, at 2-2 in the second set, was instructed to leave the court and change his sodden clothing as it was making the surface dangerous.

“He was apologising, actually. He was saying that he felt very sorry that he has to leave the court and change, but he was sweating so much,” Djokovic revealed.

“I said, man, go ahead, you know I’m actually OK sitting down for 10 minutes, just relaxing (laughter). I needed that rest. So it was great (laughter).

Physical rallies showcasing the players’ endurance, athleticism and shot-making prowess electrified the stadium and highlighted much of the second set.

Millman saved another break point to level at 3-3 but when facing a break point in the ninth game he double faulted, handing Djokovic a 5-4 lead.

The Serb served it out and streaked ahead in the third, earning two break points for a 4-1 lead.

But Millman persisted, saving those and levelling scores at 3-3 after a frustrated Djokovic was called for back-to-back time violations in the sixth game.

Djokovic, however, wrenched the momentum back. He moved ahead 0-40 in the ninth game, and although Millman saved two break points he couldn’t stave off a third.

Now ahead 5-4, the Serb did not lose another point.