Tomljanovic and Halep in decider when rain stops play

Ajla Tomljanovic was giving world No.1 Simona Halep all she could handle before rain fell over Cincinnati and ended Wednesday's play. 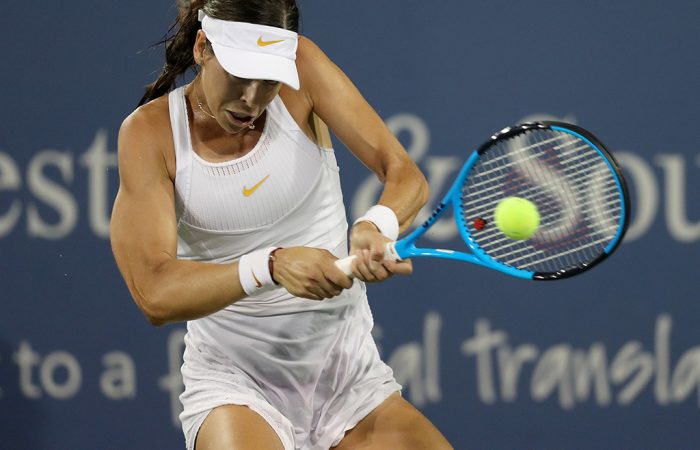 Australia’s Ajla Tomljanovic will resume her second-round match against Simona Halep on serve in the third set after rain washed out their night-time clash at the Western & Southern Open on Wednesday.

Tomljanovic had pushed the world No.1 all the way in a gruelling Centre Court battle in Cincinnati, winning the first set and going up 3-0 in the third before Halep worked her way back.

.@Simona_Halep gets it tied up!

She takes the rally of the match to break Tomljanovic! #CincyTennis pic.twitter.com/5IOyh2pjB5

Their match will resume not before 1pm local time (3am AEST) following the all-Canadian clash between Milos Raonic and Denis Shapovalov.

The winner of Tomljanovic-Halep will progress to a third-round meeting with Australian No.1 Ash Barty; the 16th seed beat qualifier Kaia Kanepi in straight sets earlier on Wednesday.

The suspension of the match came at a good time for Tomljanovic, who was struggling physically – she received an off-court medical timeout after the second set to treat a hip complaint – and had lost four games in a row to the surging Romanian in the third.

Earlier in the match, Tomjlanovic had troubled the error-prone Halep in the baseline exchanges, showcasing impressive power, depth and consistency to build an early 5-2 lead.

Although Halep won two games to close the gap, Tomljanovic sealed the first set before dropping serve three times to surrender the second.