Sydneysider Rinky Hijikata, together with Japan's Naoki Tajima, has progressed to the semifinals of the Wimbledon boys' doubles event. 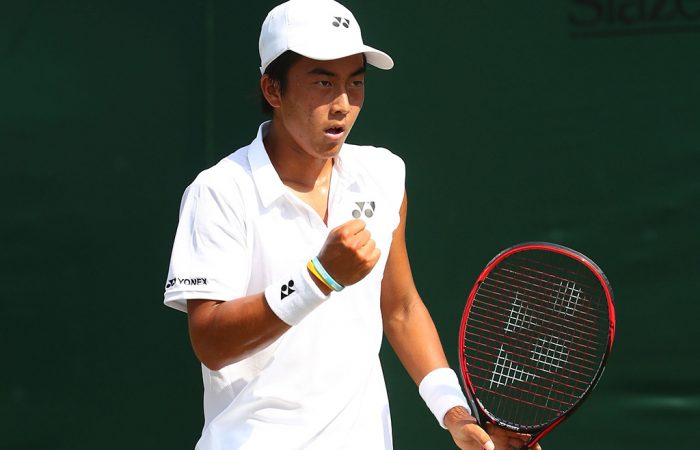 Their semifinal opponents are yet to be determined.

The victory followed on from their sensational upset of top seeds Ray Ho and Chun Hsin Tseng – both of Chinese Taipei – in the second round.

“It feels pretty good. It’s not every day you get to play at Wimbledon. It’s always been a dream of mine to play here and to make it this far in the doubles is pretty good,” said Hijikata, who lives and trains in Sydney.

“Especially after a bit of a disappointing singles result, it’s good to have a run in doubles.”

Hijikata lost 7-6(5) 6-4 in the first round of the boys’ singles tournament to Spain’s Nicolas Alvarez Varona.

But prior to that he enjoyed the opportunity to hit with some Australian pros, including Nick Kyrgios on one of the 15th seed’s off days, and Alex Bolt ahead of the South Australian’s first-round doubles match.

Having played the Australian Open junior event – he reached the quarterfinals in singles this year – and also at Roland Garros, the 17-year-old said he wasn’t overawed when he arrived at Wimbledon this year, his first visit to the All England Club.

“I wasn’t too nervous; maybe just before my match I had a couple of nerves. I played at the Aussie two times now, I’ve played at the French, and both times I’ve had pretty big crowds both for and against me, so I think that’s helped me.

“Once I came here I was kind of used to it and I was able to I guess zone in a bit on myself.”

His partnership with Tajima has been fruitful from the beginning.

The pair, who communicate in Japanese on the court, first teamed up in June this year at the Astrid Bowl in Belgium, where they reached the final.

They’ve won seven of their nine matches together across three tournaments so far.

“We’ve known each other a while, we’ve both been playing similar ITF tournaments,” Hijikata said.

“I didn’t have a partner coming into this tournament. I think his partner pulled out of one of the (earlier) tournaments so I asked him and he said he was keen to play. We did pretty well (at the Astrid Bowl). I asked him if he wanted to play at Roehampton and Wimbledon (too).

“I was pretty lucky to be able to play with him, he’s a great doubles player and he won the French Open junior doubles (this year). He’s been great – he hasn’t done much wrong.”