Aussie women out of Wimbledon qualifying

Lizette Cabrera, Arina Rodionova and Priscilla Hon all fought hard yet went down in the second round of the Wimbledon qualifying event at Roehampton on Wednesday. 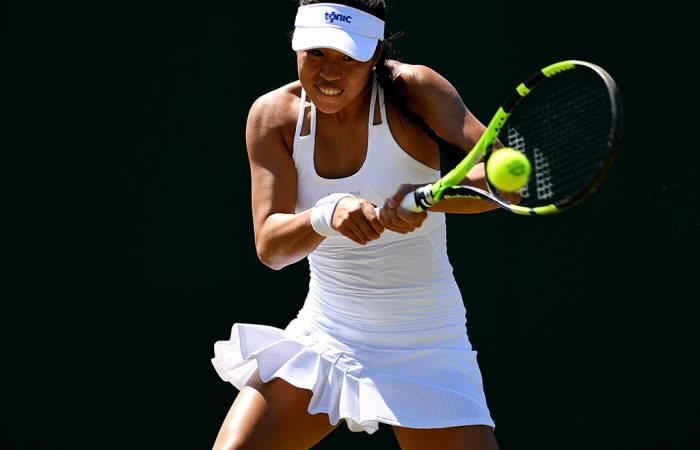 There are no more Australian women left in the Wimbledon qualifying draw after the three in action on Wednesday – Lizette Cabrera, Arina Rodionova and Priscilla Hon – fell in tight matches at Roehampton.

However, five Aussie men will attempt to seal their places in the main draw when the final round of qualifying takes place on Thursday.

In the last match of the day on Court 4, Cabrera took on reigning Wimbledon girls’ singles champion Claire Liu and succumbed to the American 6-4 4-6 6-1.

The Queenslander looked headed for an early exit when she trailed 6-4 4-2 but wrested control of the second set in a high-quality affair where Cabrera found the range on her groundstrokes and reeled off a succession of winners.

Just as she did in the first round, @lizzycabrera97 recovers from a set and a break down to send her match to a third. pic.twitter.com/uVDPeiwu2S

Liu broke immediately in the third set and built a 4-1 lead; Cabrera had break point chances in a lengthy sixth game but couldn’t convert.

Ruse went down hard on her ankle at 3-3 in the first set and after a lengthy medical time-out was able to resume, before the Aussie eventually took the first set.

In the second set Rodionova fell behind 5-1 before closing the gap to 5-4, and led by a break in the third before Ruse – whose playing style bears a striking resemblance to countrywoman Simona Halep – staged a comeback.

After several entertaining exchanges pitting Ruse’s aggression against Rodionova’s crafty counterpunching, Ruse eventually broke serve for a 5-4 lead and showed little nervousness in closing out the match after more than two-and-a-half hours on court.

While Hon had four aces, Loeb struck five and was impressive on serve, winning more than 80 per cent of her first-serve points and successfully countering the Aussie’s weapons – a big serve and powerful forehand – throughout the match.

Hon had beaten Loeb just a few weeks ago in the first round of the $100,000 ITF tournament in Surbiton and had won four of her six grass-court outings coming into the match, yet it was Loeb exacting revenge.

The American faces Mona Barthel for a place in the main draw.