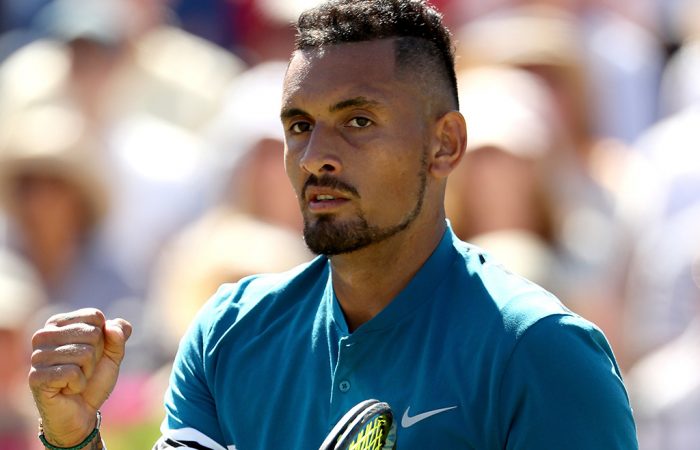 Nick Kyrgios arrived at Queen’s Club in 2018 having never won a match at the prestigious grass-court tournament.

He now finds himself in the semifinals.

The Australian on Friday ousted defending champion Feliciano Lopez 7-6(5) 7-6(3) to set up a meeting with No.1 seed Marin Cilic, his serve again clicking on the lawns of London.

Just like he did in his second-round win over Kyle Edmund, Kyrgios slammed 32 aces during the one-hour, 35-minute victory over Lopez, including a second-serve ace at 215 km/h on a break point down.

“For some it’s not (percentage tennis) but for me I feel like I can’t miss the same serve twice so I got for it, and if I make it, I make it. If I miss it, I miss it,” Kyrgios said.

“I thought I focused really well. He played really, really well today, he served well. I’m just really happy to get through.”

He’s now won his past three matches against the Spanish veteran, all on grass, and got on top in the second-set tiebreak as Lopez’s game unravelled in errors.

Kyrgios also reached the semifinals on grass last week in Stuttgart, and has won five of his past six matches.

Sam Stosur’s somewhat surprising form on grass continued thanks to the Australian’s straight-sets win over Alison Riske in Mallorca.

Playing against an opponent notable for her grass-court nous, Stosur, currently ranked 98th, brushed the American aside 6-4 6-2 to advance to her first grass-court semifinal since Eastbourne in 2011.

Stosur has long said she feels more comfortable on clay and hard courts, yet will shoot for a place in the final when she takes on defending champion Anastasija Sevastova on Saturday.

The third seed recovered from 6-3 3-0 down against another Aussie, Ajla Tomljanovic, to eventually run out a 3-6 6-3 6-1 winner. The loss ended Tomljanovic’s four-match winning streak.

Sevastova has won her past two meetings with Stosur and leads the head-to-head series 3-2.

Earlier on Friday in the quarterfinals at the Gerry Weber Open in Halle, Matt Ebden pushed Roger Federer hard before falling in two tight sets.

Federer overcame the Australian 7-6(2) 7-5 to move through to a semifinal meeting with qualifier Denis Kudla.

Ebden hung with Federer throughout the first set thanks to his relentless net-rushing, which forced the Swiss into several errors. Yet a double-fault in the tiebreak proved costly for the Aussie, as it gifted Federer a bundle of set points which he duly converted.

Ebden was even more dangerous in the second set, twice going up a break against the world No.1. He even served for the set leading 5-4, only for Federer to go up a gear.

The 36-year-old reeled off the last four games to seal victory.

Nevertheless, Ebden will be thrilled about his grass-court form going into Wimbledon; he’s won 10 of his past 13 matches, reached semifinals at the Surbiton Challenger and the ‘s-Hertogenbosch ATP event, and improved his ranking to a projected high of world No.51.

Australian Jason Kubler of Friday advanced to his first ATP Challenger semifinal on grass with a come-from-behind victory over Canadian Peter Polansky in Ilkley.

“This one was a tough match… I had to claw my way back!”@JasonKubler booked the first spot in Saturday’s semi-final, with a fantastic performance.#IlkleyTrophy @ATPChallenger @LiveSportsFM pic.twitter.com/pgIDmsEiAn

His compatriot Jordan Thompson, the tournament’s No.1 seed, went down 6-4 6-4 to Ukrainian Sergiy Stakhovsky in the quarterfinals.