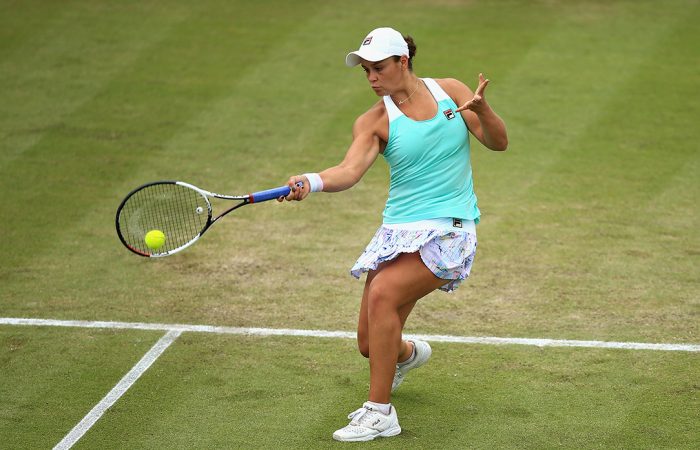 Australia’s Ash Barty has continued her excellent run of form by booking her place in the final of the Nottingham Open.

Top seed Barty made it four straight wins as she swept aside Japan’s Naomi Osaka 6-3 6-4 in 65 minutes in the English grass court tournament, boosting her confidence in the build up to Wimbledon. The victory also helped the world No.17 gain revenge for her defeat to Osaka at the Australian Open in January.

“I think it’s been a very clean week for me. I’ve served well and gotten myself into return games very well,” Barty said.

“I think when I first got on the grass, I instantly felt comfortable.

“I’m obviously feeling very good this week and I hope to go one more tomorrow. Being in a final again is always a positive no matter where you are.”

“I knew today I was going to have to step up another level, and I was able to do so. I’m pretty pleased with that,” she added.

Barty faces Johanna Konta in the final. who is aiming to become the first Brit to win a WTA singles grass title at home since former Wimbledon champion Virginia Wade in Eastbourne in 1975.

World No.22-ranked Konta said she was wary of Barty, who won their most recent meeting in Wuhan last year.

“She loves this surface and she’s very vocal about it. I’m sure she’s going to be playing her best tennis. She’s improved a lot and is playing very well since she’s come back.

“That’s a great challenge for me, to play someone who’s so in form. I’ll do my best to just battle hard.”

Barty, who is into her second final of the year after losing in January to former world No.1 Angelique Kerber in Sydney, added: “I lost to Jo here (Nottingham) last year, so I think I can go in and play some pretty free tennis.”

One more to go 🤙🤙🌱🌱 pic.twitter.com/keVOIOCJlX

Alex De Minaur reached his second ATP Challenger final in as many weeks, defeating Belarusian Ilya Ivashka 6-2 6-4 in the semifinals.

The 19-year-old De Minaur made his top 100 debut last week and is now projected to break into the world’s top 80 if wins the title. He faces Brit Dan Evans in the final, a former world No.41 returning from a one-year drug suspension.

DID YOU SEE: Kyrgios gallant in Federer defeat