Sam Stosur is set for a French Open third-round showdown with former champion and world No.3 Garbine Muguruza. 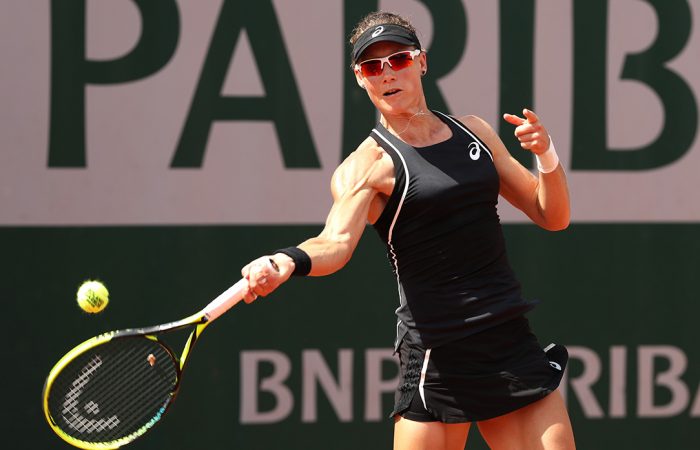 Sam Stosur is braced for a torrid test of her French Open title credentials after booking a third-round showdown with 2016 champion Garbine Muguruza.

Australia’s former finalist and four-time semifinalist is through to the last 32 in Paris for the 10th straight year following an impressive 6-2 7-6(1) victory over doubles partner Anastasia Pavlyuchenkova.

Fellow Aussie Daria Gavrilova has also reach the third round, where she will face Belgian 16th seed Elsie Mertens.

Stosur is yet to drop a set in this year’s tournament, but knows from first-hand experience that Muguruza looms as a formidable force.

Not only is the world No.3 the only woman to have conquered both Serena and Venus Williams in Grand Slam finals, Muguruza blew Stosur off the court in a 6-2 6-4 semifinal two years ago en route to winning her maiden major at Roland Garros.

“I don’t feel like I played too bad in that match. She just beat me that day and that’s the way it went,” Stosur recalled.

“It’s going to be very tough. She obviously plays very well here. She likes it here as well and she’s been in the top 10 now for a very long time.

“So it’s certainly going to be a tough match-up for me, but I’m looking forward to the challenge.”

The former US Open champion knows a strong serving performance is key to upsetting Muguruza.

“She hits the ball very hard and flat and deep, and I do remember in that match (two years ago) she was hitting really good returns, really close to the baseline, which straight away puts me on the back foot,” Stosur said.

“So serving’s going to be key.

“But that’s not necessarily too dissimilar to any other day, and I guess just trying to combat her depth and pace of shot.

“So I’m going to have to be aggressive as well.”

Stosur’s second-round victory improved her stellar win-loss tally at Roland Garros to 39-14, easily her best return from any of the four Slams.

Unseeded for the first time in a decade after missing four months of 2017 with a hand injury, Stosur says her fine record in Paris often provides a source of confidence in clutch moments.

“I’ve had good success here, I love playing on these courts and it’s probably one of my favourite places to play,” she said.

“So that’s always going to give you a bit of a lift.

“When you get into little tight moments, you can sort of draw on that and know you’ve been able to do it before in this exact place.”

Muguruza has lost to Stosur before on clay and is suitably wary.

“She can be a very serious and dangerous opponent,” the Spaniard said.

“She has (won) a Grand Slam. She is experienced in semifinals here. It’s going to be a tough match.”