After saving a match point in a see-sawing second round battle, Daria Gavrilova is into the French Open third round for the first time. 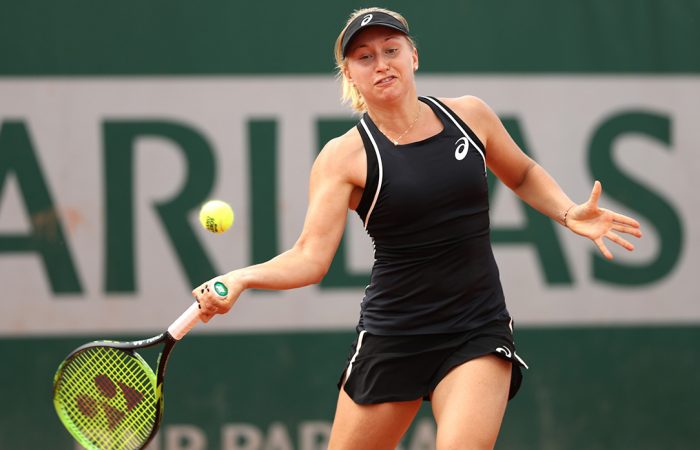 Daria Gavrilova felt she’d “wasted another French Open opportunity” before cashing in on a stunning meltdown from Bernarda Pera to scrape into the third round in Paris.

The No.24 seed teetered on the brink of a humbling straight-sets exit before saving a match point and joining fellow Australian Samantha Stosur in the last 32 with a 5-7 7-5 6-3 Houdini act on Thursday.

Gavrilova lead 5-2 in the opening set, before conceding seven consecutive games. Pera built a 5-2 lead in the second set, before the rollercoaster encounter turned Gavrilova’s way when she saved a match point with a nerveless backhand past the net-rushing American in the eighth game.

Pera again served for the match at 5-4, but was unable to land a ball in the court, the left-hander incredibly committing nine unforced errors in a row, including a double-fault, to gift Gavrilova a lifeline.

There was no looking back after that, with Gavrilova reeling off five straight games in the deciding set before clinching an epic victory after two hours and 35 minutes.

“I’m still a bit like ‘what happened’? It was torture, really,” Gavrilova said.

“I still did not play great. I’d call it an ugly win. But just happy with the way I fought.

“There were moments where I played really well. At the end of the third set, I took my chances and just went for it. It was brave.

“Hopefully I can just build on that.”

The great escape followed a similar fightback from a set and a service break down in the first round against Sorana Cirstea and thrust Gavrilova into a return showdown with Australian Open semifinalist Elise Mertens on Saturday.

Mertens, the 16th seed at Roland Garros, eliminated Gavrilova in the first round in Paris last year before recovering from 5-0 down in the opening set to also send the Australian No.2 packing from the Australian Open in January.

“I would love to get revenge and I’m going to do everything to prepare and I think, all in all, it’s a pretty good draw for both of us,” Gavrilova said.

“It’s a good chance for me to get into the second week of a Slam.”

Gavrilova’s previous best result in Paris was reaching the second round in 2015.