Sam Stosur will open Australia's Fed Cup World Group Play-off tie against Netherlands when she lines up against Lesley Kerkhove in the first singles rubber. Ash Barty will follow, taking on Quirine Lemoine. 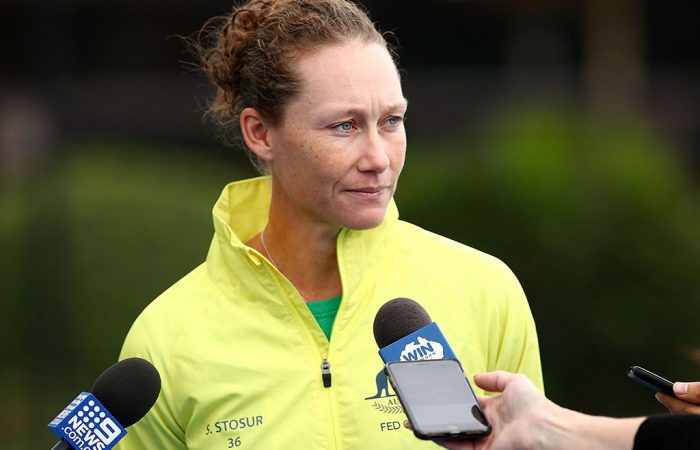 The hosts’ No.1 player, Ash Barty, will then take on Quirine Lemoine in the second of Saturday’s singles rubbers.

The match-ups were determined on Friday at the official draw ceremony at Port Kembla Pool, a stunning coastal setting just south of Wollongong.

In the reverse singles on Sunday, Barty will play Kerkhove before Stosur lines up against Lemoine.

In the doubles, Barty and Stosur will team up to face Demi Schuurs and Indy De Vroome.

The winner of the tie on 21-22 April at the Wollongong Entertainment Centre will take their place in the eight-nation World Group in 2019.

Treated to a fantastic display of synchronised swimming to determine the draw 👏 #AUSNED #FedCup pic.twitter.com/OewGQCPdw3

Asked about the decision to select Stosur for the opening singles over Daria Gavrilova, ranked 34 places higher at 24 in the world, Australia captain Alicia Molik said: “It makes sense that we can share the load.

“We’ve got the option to play Dasha on Sunday, with Sam playing on Saturday – that’s a real viable option for us.”

Stosur: “I’m excited. It will be great to get out there and hopefully I can get the team off to a good start. It’s a nice feeling knowing I’ve played a lot of Fed Cup matches, it’s just a case of handling it on the day.”

Barty: “It was a very even selection throughout our team – I think anyone can play any spot and I’m just happy to be able to do my job for the team.”

Gavrilova: “We were all ready to play and even Des (Aiava) had a good chance, we were all practising really well, and there’s no surprises with the picks.”

Netherlands captain Paul Haarhuis conceded his team are heavy underdogs for the tie with their top three singles players absent, leaving world No.210 Kerkhove as the number one singles player.

“Obviously I’m not confident that we will pull it off – because that’s why we’re the underdogs,’’ said Haarhuis.

“Every match to win is going to be a big struggle. And then for it to happen three times in five matches would be somewhat of a miracle, but we believe that every match in itself we can win, and that’s how we have to focus: on each match individually.”