Australia's Fed Cup team is a strong favourite to overcome the Netherlands in this weekend's World Group Play-off tie in Wollongong. And according to captain Alicia Molik, that's perfectly fine. 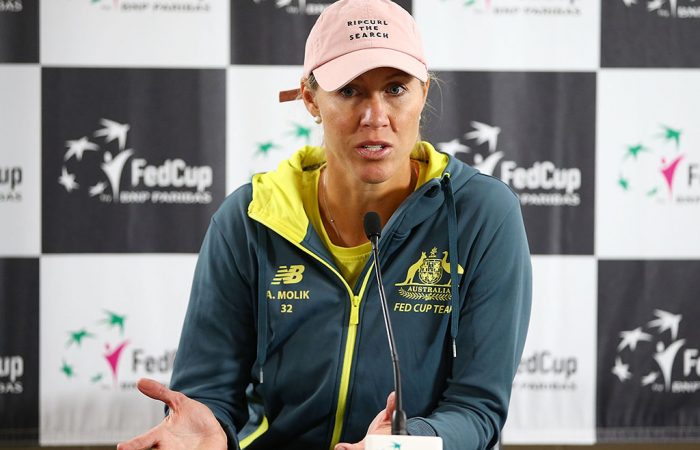 Dutch Fed Cup captain Paul Haarhuis began the mind games when he said “the pressure is on the Australian girls” to win this weekend’s World Group Play-off tie in Wollongong.

“They have to win, it would be terrible if they lose to us. Probably the biggest upset ever,” Haarhuis said on Monday.

When those comments were relayed to Alicia Molik on Wednesday following a team training session on the newly-laid hard court at Wollongong Entertainment Centre, the Australian captain didn’t baulk.

“We are the favourites here. We have better rankings, we’re expected to win,” Molik said.

“I think that’s a good position to be in. It means we have runs on the board, our players are ranked where they are for a really good reason. But we certainly will not be giving this one up.”

A win would see Australia return to the eight-nation World Group in 2019, the top tier of the competition from which the Fed Cup champions are determined.

Australia last featured in this elite bracket in 2015.

With three top-60 players and one of the world’s most promising teenagers forming its four-player squad, Australia is far more credentialled than a Netherlands outfit devoid of its four highest-ranked singles players. Lesley Kerkhove leads the team as the fifth-ranked Dutchwoman and world No.210.

“They (the Australian girls) should feel pressure because they’re better, on paper,” Molik said.

“But it’s no different I think to many other ties that we’ve played where we have been the favourites.

“Pressure’s normal in sport; it’s something you feel every single week. Ash has played Fed Cup for a couple of years now. Dasha now has a few years under her belt. Sam is seasoned; she knows exactly how to perform on this stage. And Destanee’s just getting used to it.

“Our team has so much more experience than maybe a couple of years ago, when we did lose to the Dutch in a World Group Play-off (in 2015).”

Both teams enjoyed their first hit-out on the indoor plexipave court on Wednesday.

For Australia, Barty and Gavrilova practised around lunchtime before Stosur and Aiava were scheduled to duel later in the afternoon.

Molik said the court was “perfect” for her team.

“It was really high quality actually – they (Barty and Gavrilova) just played for the last two hours,” she said.

“It’s only a couple of days before (the tie on) the weekend so for us it’s important to play a lot of games, sets and matches between the players. They like the court – it’s something they’re pretty used to.

“Destanee and Sam come out soon for our next block of training – it will be interesting to see how the court responds to, for instance, Sam’s game, where she uses a little bit more kick and spin.

“(Team selection) will be decided Thursday night ahead of our final preparation on Friday.

“We’re happy with the court, the conditions, and we’re extremely happy with what’s been presented at Wollongong.”