Kyrgios to face Zverev in Miami

Nick Kyrgios and Alexander Zverev will meet again at the Miami Open in the latest installment of their burgeoning rivalry. 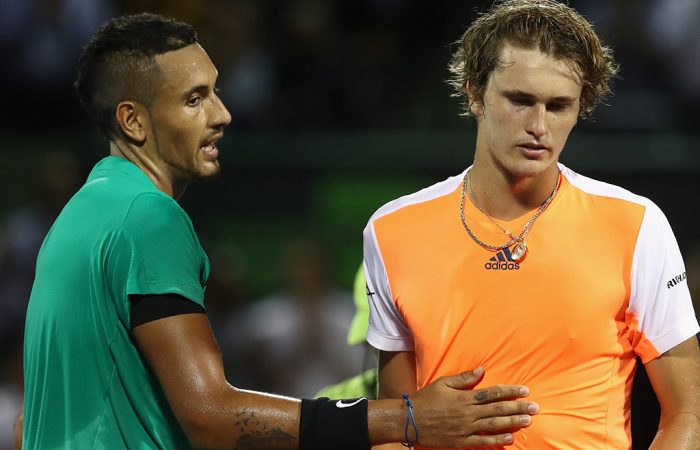 With Alexander Zverev’s three-set victory over David Ferrer on Monday night in Miami, fans will be treated to the next chapter in the German’s rivalry with Nick Kyrgios.

The Aussie earlier on Monday beat Fabio Fognini in straight sets to advance to the last 16 at Key Biscayne for the third straight year.

Kyrgios and Zverev will do battle under lights at Miami’s Stadium court on Tuesday, not before 9pm local time – or 12pm Wednesday AEDT.

Kyrgios, who is working his way back into form after elbow and back issues, has a lot of respect for his fellow young-gun.

“It will be a lot of fun,” said Kyrgios of the upcoming fourth-round meeting with the 20-year-old.

“I’m sure we’re both going to look forward to it. He’s a great player.”

The pair have met five times, with Kyrgios leading the head-to-head 3-2. Yet in their last meeting, at February’s Davis Cup tie between Australia and Germany, Zverev got the better of Kyrgios in straight sets.

The most exciting match between the two talents came at the Miami Open 12 months ago; Kyrgios won a barnstorming quarterfinal 6-4 6-7(9) 6-3.

“Hopefully we can show another (great match) like last year here. Hopefully it will be entertaining,” Zverev said after surviving a gruelling 2-6 6-2 6-4 battle against Ferrer.

The winner will advance to the quarterfinals where either Borna Coric or Denis Shapovalov will await.