Nick Kyrgios is the last Australian left in the Miami Open singles after he beats Fabio Fognini, but Ash Barty and Thanasi Kokkinakis lose. 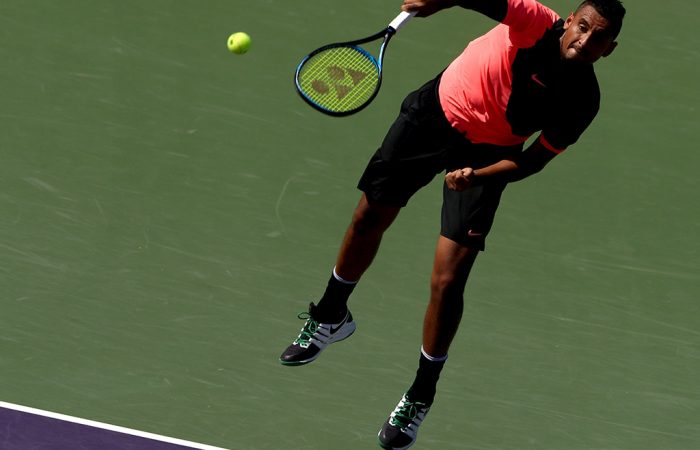 Nick Kyrgios produced another blistering performance to reach the last 16 at the Miami Open but fellow Aussies Ash Barty and Thanasi Kokkinakis went out.

Kyrgios did not face a break point and needed just 66 minutes to see off Italy’s Fabio Fognini 6-3 6-3 in round three.

“I knew it was going to be tough, he has a lot of tricks up his sleeve and is very unpredictable,” Kyrgios told atpworldtour.com.

“I knew I had to serve well, play aggressive and keep the points short.”

He added: “Honestly, I was hoping to have a bit more court time to test out the body, so I’m going to see how it goes in the next round.”

The 17th seed goes on to face fourth seed Alexander Zverev or 28th seed David Ferrer for a place in the last eight.

Kokkinakis almost backed up his remarkable win over Roger Federer with another shock, but ultimately went down 3-6 6-4 7-6(4) to 31st seed Fernando Verdasco.

Barty made a superb start against fourth seed Elina Svitolina, racing into a 5-2 lead only to see the Ukrainian hit back with five games in a row to take the set.

The Australian number one recovered an early break of serve in the second as she battled to keep pace with Svitolina, but a second break proved decisive.