Kokkinakis: “I gave myself a legit shot”

Thanasi Kokkinakis reflects on a career-best win over Roger Federer, a stunning result which sent him into the third round of the Miami Open. 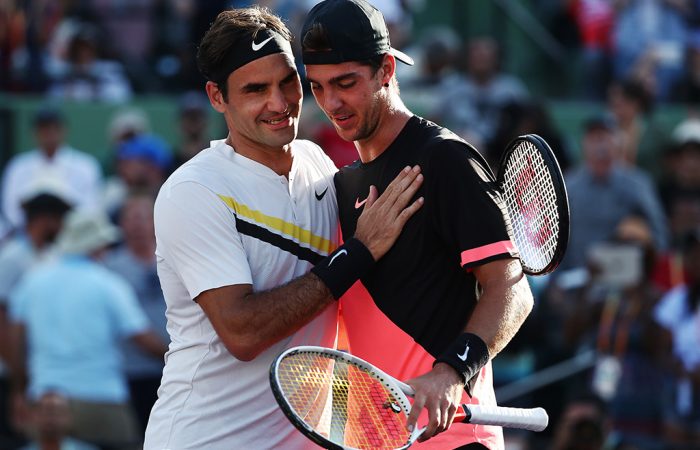 That 175th-ranked qualifier Thanasi Kokkinakis was able to beat world No.1 Roger Federer is incredible enough.

That he was able to do it without one of his own weapons firing made the feat all the more special.

Kokkinakis stunned the defending Miami Open champion 3-6 6-3 7-6(4) to reach the third round at Crandon Park, handing Federer his second straight loss – the first time the Swiss has lost back-to-back matches since 2014.

It was also the first time a world No.1 has fallen to a player ranked so low since 2003.

Reflecting on a landmark win, Kokkinakis – who’d never before beaten a player ranked inside the top five – said his serve could have been better.

“I didn’t think I served very well the whole match,” said the South Australian, who landed just 52 per cent of first serves during the contest, and won less than 80 per cent of first-serve points.

“I came up with some big ones I guess when I needed to. The serve is usually one thing I pride my game on. It’s a big part of my game.

“Honestly, to beat someone like that without serving great is a good testament to my game, I think. Winning a lot of baseline rallies and dictating with my forehand, I think when I’m playing like that off the ground, I can be very dangerous.”

The tennis world knows that the 21-year-old’s current status as a 175th-ranked qualifier is misleading; Kokkinakis has been a top-70 ranked player whose star was rising in 2015 before a succession of injuries ravaged the better part of two years of his career.

The 2018 season is almost three months old yet Kokkinakis had played just four events and eight matches this year heading into Miami, where his victory over Federer marked his fourth on the trot.

Given his lack of matches, it was jaw-dropping what he was able to do against Federer, the in-form player on the circuit with a win-loss record this season of 17-1 prior to Saturday’s loss.

Kokkinakis finally feels he is starting to build some momentum, which should help push his ranking northward.

“It feels good. Any match feels good to win, especially now where I am in my sort of comeback and trying to play some matches,” he said.

“(The) goal for the match (against Federer) wasn’t to get a few games or to be competitive. You know, I gave myself a legit shot.

“Took a little bit of time to adjust. Then when the game kind of slowed down to me, I started being able to execute and do what I needed to. I thought I was in control of more baseline rallies, for sure.”

Federer is one of several top players Kokkinakis has enjoyed the opportunity to practice with. Training with the Swiss legend in Dubai was an extremely beneficial experience, one during which Kokkinakis said he’d “been all ears listening to him.”

Being able to hang with Federer on the training court was something that helped imbue Kokkinakis with the belief he had what it took to match the world’s best on the match court.

It was just a matter of translating that from practice to competition. Which is exactly what happened on Saturday in Miami.

The young Aussie will get another shot at a top player – 31st seed Fernando Verdasco, a former world No.7 – on Monday, a chance to go even deeper at one of the world’s biggest tournaments.

“I played all the sort of big four now. Had a couple good wins,” Kokkinakis said.

“I know what my abilities are on the practice court. Maybe Dubai helped a little bit to know what he (Federer) likes to do.

“I played a lot of good players in practice and in matches. In practice, I feel really good with a lot of the players. Again, there’s obviously that difficulty trying to bring that to a match court.

“I know if I bring that level, I can beat a lot of good players.”