High-flying Victorian Marc Polmans has returned to compete in Mornington after a three-day stint at ATP University in Miami. 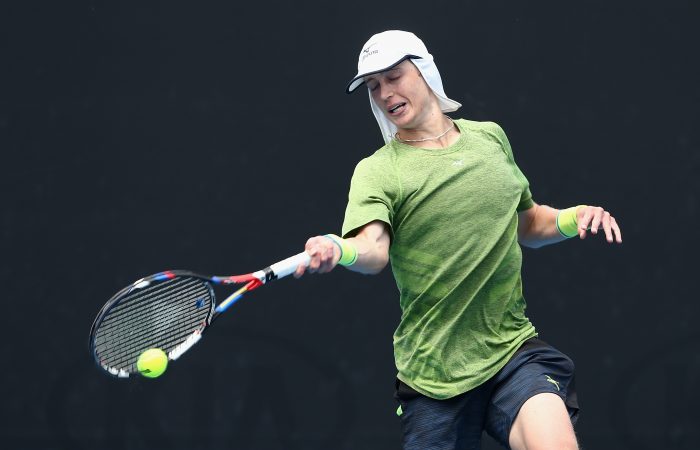 After consecutive Australian Pro Tour titles in Renmark and Mildura – and a short stopover in the US – Marc Polmans has returned to his home state of Victoria to compete in the Mornington Peninsula Tennis International #1.

After his recent success saw him crack back into the world’s top 200, Polmans was invited to join 15 other ATP World Tour players from 10 countries at ATP University, an educational session that is held twice a year to provide information about ATP World Tour operations. Held in Miami, players learned about 14 specific topics, including anti-corruption, anti-doping, giving back and an introduction to saving and investing.

“I was in America for about three days,” Polmans, who returned on Monday, said. “It’s good to be back in Australia, it was a long way to go, but for some reason, the jet lag hasn’t affected me so hopefully it stays like that.

“I’m here now and I had my first practice on the clay for a few weeks, so that’s good,” he added. “I played in Mornington two years ago so I’ve seen these courts before. I’m just looking forward to tomorrow.”

Polmans, the top seed this week, will face big-hitting Sydney-sider Matthew Barton on Wednesday in his opening round clash. The pair met recently on grass in Mildura, a match in which Polmans was pushed all the way.

“That was a tough match for sure,” he said. “On the clay I feel a bit more comfortable. I have a better chance of getting into the rallies, but I’ve got to be ready.”

Second seed Max Purcell will also open his campaign on Wednesday against qualifier Omar Fields, as will Dayne Kelly (No.3), the Victorian playing Matthew Romios.

With main draw action having already begun on Tuesday, fourth seed Blake Eliis made safe passage into the second round after a comfortable victory over Thailand’s Chanchai Sookton-Eng, while seeds Scott Puodziunas (No.8) and Gavin Van Peperzeel (No.5) were less fortunate, falling to wildcard Dane Sweeny and veteran Michael Look respectively.

Sixth seed Jeremy Beale was also a winner on the day.