Matthew Ebden's return to Davis Cup is a reward for his hard work in overcoming injury. 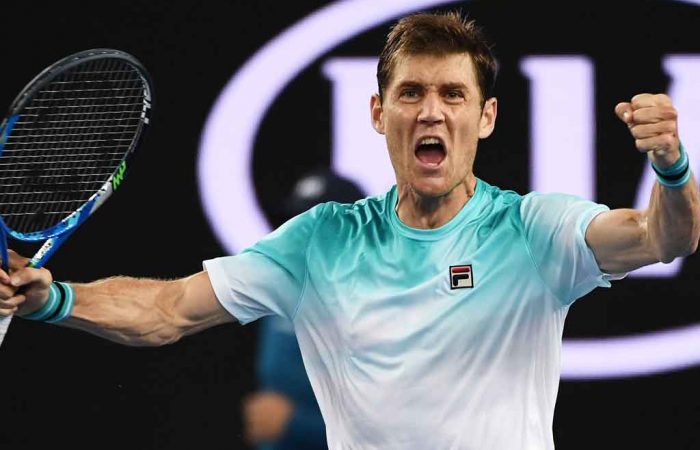 When Matthew Ebden returns to Davis Cup doubles action alongside John Peers it marks another important progress point in a career that was temporarily stalled by injury.

The last time Ebden competed for Australia was in 2013, when he combined with Lleyton Hewitt to win the doubles against Denis Istomin and Farrukh Dustov in the Group 1 semifinal against Uzbekistan.

In the period since, the West Australian has overcome a knee problem which eventually required surgery and saw his singles ranking drop to No.699 at the start of 2017.

A return to his current No.74 ranking – within reach of the world No.61 high he achieved in 2012 – came via wins on the Challenger tour (including Canberra and Toyota late last year) and his hard work in qualifying for ATP events.

One of those events was Newport last July, where he won six consecutive matches before finishing runner-up to John Isner. There was a chance to atone against the American in the first round of the Australian Open and Ebden did so superbly as he upset the world No.16 in four sets.

The attention-grabbing win was no doubt among the factors as Hewitt, as captain, noted that Ebden was “back in the mix” for Davis Cup selection given his rapidly-rebuilding ranking.

As he prepares for today’s rubber alongside John Peers – in which the Australians will take on Peter Gojowczyk and Tim Puetz – Ebden has been buoyed by the individual gains in the team environment.

“It’s been great,” said Ebden of his return to the Davis Cup fold.

“Lots of training, hard work which I would be doing anyway before I prepare for the coming months on tour.

“There was no better environment to train and prepare myself for the rest of the year.”

Ebden takes to the court with a milestone that few players can boast in Davis Cup, with a perfect 5-0 record since his 2012 debut in the competition. Four of those wins have been in singles, with the doubles win with Hewitt occurring in five hard-fought sets.

If that bodes well for Ebden’s return alongside Peers, there’s also the form and positivity that he brings in his successful comeback from injury.

“I think I’ve changed,” he said ahead of his selection for doubles. “I think that’s probably showing the last 12 to 18 months for whatever reasons.”

One of those reasons is undoubtedly commitment, Ebden explaining how experience works in his favour.

“My body’s in unbelievable shape physically. I worked hard on my body to maintain it. Maybe as you get slightly older with the year you just learn that you need to take care of your body – the recovery, the stretches, the massages. All that sort of stuff. Maybe I’ve become better in that regard. Just become aware of how important that is.”

With that, there’s both optimism for the future and a determination to fully embrace every opportunity.

“I wouldn’t be surprised if my best years in tennis are still ahead of me but I am experienced to know that you can’t take anything for granted in sport or in life,” Ebden said.