De Minaur in the mix for Davis Cup singles 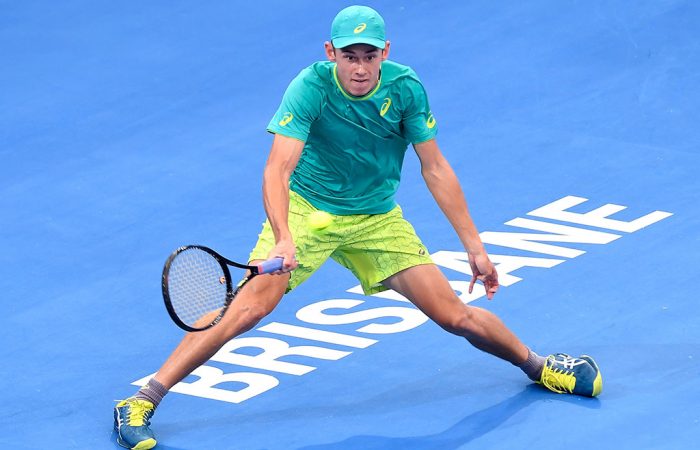 A whirlwind summer does not look like slowing down soon for Alex de Minaur, with Lleyton Hewitt tempted to unleash the teenage rookie on Germany No.1 Alexander Zverev in their Davis Cup tie in Brisbane.

Hewitt is toying with the idea of blooding de Minaur against Zverev in the opening singles rubber at Pat Rafter Arena, saying all the pressure is on the world No.5 at the first hurdle.

“He (de Minaur) is in the mix. But there’s a lot of pressure on Sascha (Zverev) as well,” former world No.1 Hewitt said.

“He is a quality player. He’s made the ATP Finals at the end of last year, he has won Masters Series events – there is going to be a lot of expectation on him to go out there (and win). Whoever we put in can go in and have a crack.”

World No.139 de Minaur is the lowest-ranked singles player in Australia’s Cup squad – behind Nick Kyrgios (No.14), Jordan Thompson (102) and John Millman (108) – and is ranked 135 places below Zverev.

However, de Minaur is one of Australia’s form players after a breakthrough summer in which he made the Sydney International final and Brisbane International semis – with Hewitt spotted courtside cheering him on.

De Minaur suffered a four-set first round loss to former world No.4 and eventual quarter-finalist Tomas Berdych at the Australian Open. The draw for the first-round hard-court tie will be held on Thursday.

“He had a great summer. Last year he had a breakthrough summer in some ways on tour but he sustained that and went an extra step this year,” Hewitt said of the Sydney-born, Spain-based de Minaur.

“He would have beaten a lot of players at the Aussie Open if he had not drawn Tom Berdych in the first round. I have got ideas of how it (singles draw) will play out but you will find out on Thursday.”

De Minaur may have surprised plenty of rivals this summer but Germany team captain Michael Kohlmann is all too familiar with the teenager.

Kohlmann was there when de Minaur enjoyed his first career breakthrough, reaching a second-tier Challenger tour final at Eckental, Germany in late 2016 as a qualifier. “I saw him at that Challenger in Germany, his breakthrough tournament,” he said.

“I like his game, his attitude on court. He reminds me a lot of Lleyton Hewitt.”