Daria Gavrilova will be the first home hope to hit Rod Laver Arena at the 2018 Australian Open. 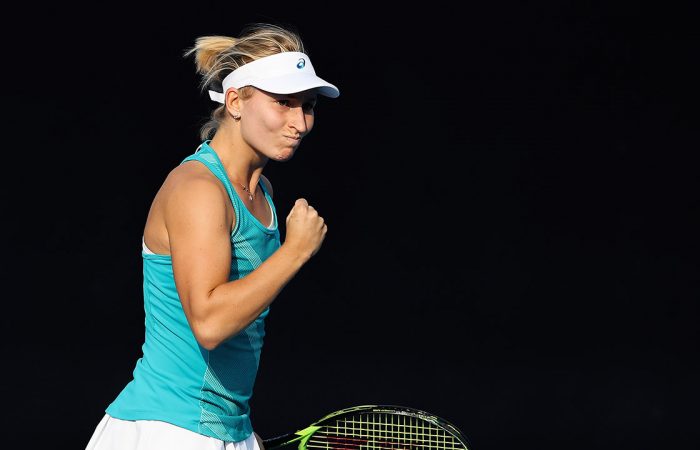 Fittingly, after dazzling fans as the last local standing for the past two years, Daria Gavrilova will be the first home hope to hit Rod Laver Arena at the 2018 Australian Open.

After storming to the last 16 in 2016 and 2017, Gavrilova is relishing the chance to play under the bright lights once more against American qualifier Irina Falconi on Monday night.

“I was a bit surprised but I’m really excited. I really can’t wait,” said the 23-year-old ball of energy.

Gavrilova is seeded 23rd, in form after reaching the semi-finals in Sydney last week and in the mood to embark on another run to the second week in her home town of Melbourne.

She hopes to once again feed off the buzz of the crowd in her bold attempt to follow in the footsteps of 2017 grand slam gate crashers Jelena Ostapenko and Sloane Stephens and join the growing club of first-time major winners in an exciting new era of women’s tennis.

“I think everyone is feeling this way. Everyone is feeling like: ‘Okay, we’ve all got a chance’. I definitely feel like I also have a chance. I’ll just compete very hard every match,” Gavrilova said, insisting she’s feel no pressure at her home slam.

Gavrilova is among nine Australians in action on day one.

Nick Kyrgios is also in prime-time play, the 17th seed up against Brazil’s world No.100 Rogerio Dutra Silva at Hisense Arena, the people’s court he so loves.

“Obviously that match in the fourth round against (Andreas) Seppi when I made it to the quarter-finals, ever since then I’ve kind of tried to make that memory happen again.

AUSTRALIANS IN ACTION ON DAY ONE OF THE AUSTRALIAN OPEN