Stosur claims come from behind win in Sydney

Sam Stosur had to fight but she managed to overcome a decent challenge by German Carina Witthoeft. 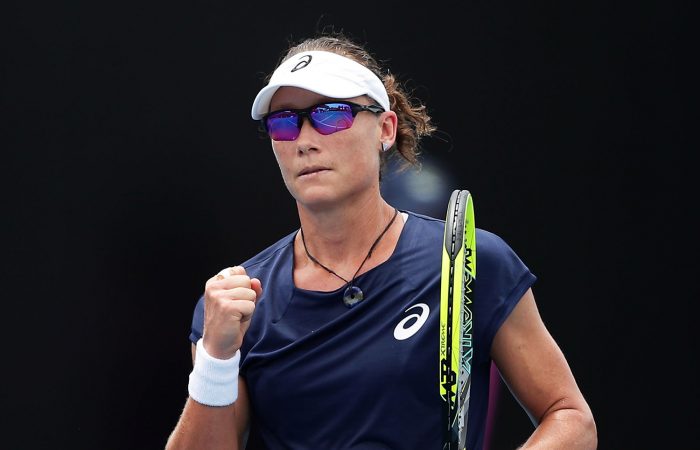 Sam Stosur has enjoyed her first win of the Australian summer to reach the second round of the Sydney International.

The Australian No.3 rebounded from a first-round exit at last week’s Brisbane International with a gritty 4-6 7-5 6-3 win on Tuesday over rising German Carina Witthoeft.

Stosur next faces the winner of Tuesday’s all-Australian clash between Daria Gavrilova and Olivia Rogowska for a place in the quarterfinals. The host nation is guaranteed two quarterfinalists, with the winner of the Ash Barty-Ellen Perez clash also progressing to the last eight.

Fans crammed in to Court 3 and stood six deep outside to get a look at the former US Open champion and world No.4.

Stosur didn’t disappoint, digging deep late in the second set – when she stood only two points from defeat – to finally prevail after two hours and 21 minutes.

The victory will serve as a much-needed confidence booster ahead of the Australian Open starting on Monday in Melbourne.

“Even though she lost the last round of quallies, she played three matches,” Stosur said of Witthoeft, a lucky loser.

“We were close in rankings. I think anyone who is pretty much main draw or in qualifying here, they are very good players. The field is so strong.

“I certainly was aware I was going to be in for a tough battle today. I felt like as the match went on I probably played better and better, started timing the ball better. Really kind of just got used to everything and started, I felt, to play pretty well. I felt my serve was really good today.

“In those moments where I really needed to knuckle down and really stick to it and make something happen toward the end there, try and serve it out, I think I did a good job. All in all, very happy.”