Kubler on a high after Playford title

Fresh on the back of an Australian Open 2018 wildcard, resurgent Queenslander Jason Kubler captures his third ATP Challenger title in Playford. 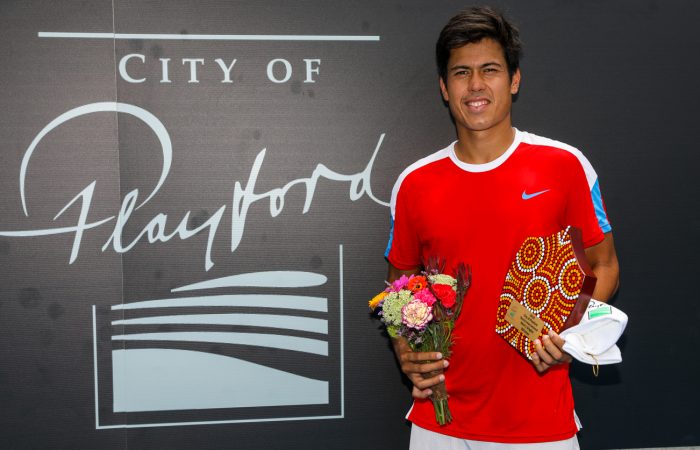 Queenslander Jason Kubler has capped off a magical week, taking out the City of Playford Tennis International on Sunday, just after it was announced he had received a main draw wildcard at Australian Open 2018.

“It’s unreal,” Kubler said. “Hearing that and then winning the tournament here, I can’t ask for much more. It’s been a pretty good few days.”

Kubler’s third ATP Challenger title comes after some outstanding form on the Australian Pro Tour, which saw him also clinch Traralgon in October. On both occasions, the 24-year-old has had to come through qualifying, something he doesn’t want to make a habit.

“Hopefully this isn’t what I have to do every time I play a Challenger, have to qualify to win the tournament,” he grinned.

“The first matches here were tough. I just had to keep my head down, keep trying and hope to come through. But then I started feeling the ball as the tournament went on.”

“Today was definitely more of a mental accomplishment,” Kubler said of his 6-4 6-2 victory. “We both came out a bit tense. It was the first tournament of the year and also a final. But the thing which stood out for me was that I did well in handling my emotions.”

Kubler, a former world No.136, now finds himself inside the world’s top 250 for the first time since 2015. “This tournament was big for me. Now I am really close to staying in the higher rankings to get into qualifying at the Grand Slams and those kinds of tournaments,” he said.

With his attention now firmly fixed on Melbourne Park, Kubler recalls his debut at the Australian Open when he last received a wildcard as a 16-year-old back in 2010. A match which also marked his first ever at ATP Tour level.

“I played Ivan Ljubicic and it all went very quick,” he said. “Hopefully I can do better than that. I feel like I’m much more mentally ready for it now.”

In the intervening eight years, the former junior world No.1 has been forced to sit on the sidelines for extended periods due to troublesome knees, having now undergone a total of six surgeries, five on his left knee and one on his right.

“I’m just happy to be back on court,” he said. “I’m going to take a couple of days off to recover and then I’ll have five or so days to get some good hits in and see what I can do.”