John Millman watched a replay of his first match point against Grigor Dimitrov and confirmed there wasn't much more he could do. 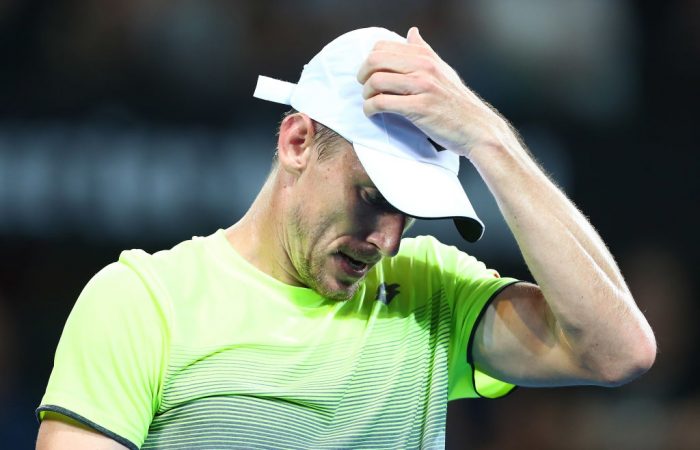 John Millman watched a replay of his first match point against Grigor Dimitrov and confirmed there wasn’t much more he could do.

The local hope had two points to beat the Brisbane International defending champion and world No.3 on Thursday night, but was cruelly denied what he said would have been a career highlight in the 4-6 7-6 (10-8) 6-3 second round tussle.

It is the third time the 28-year-old has come within sight of a big scalp in Brisbane following three set encounters with Roger Federer three years ago and Andy Murray in 2013.

But Millman, who played some of his best tennis to scare the tournament’s top seed, is sick of the gallant defeats and is hanging out for his luck to turn.

“Probably disappointment, a little bit of deja vu,” Millman said when asked to reflect on another near miss.

“I’d love to win one of those really big ones … it would have been one of the most special nights of my career if I’d won against a player like Grigor in front of my home crowd who’d stuck it out beyond midnight to watch me play.”

The Bulgarian pulled out all the stops to defy Millman on the first match point, the Australian joking that other than serving an ace he couldn’t have done much more.

But the world No.128 said scrolling through the online abuse from disgruntled punters almost led him to believe otherwise.

“What else can I do on that point – obviously the guys on Instagram think I could’ve done a bit more,” he smiled through gritted teeth as the clock ticked past 1am.

“I got called some nasty names for losing that point, but a guy who’s No.3 in world played a point fitting of a world No.3.”

Millman was due to fly on Friday to play the Sydney International qualifiers but doubts he will make it given the late finish on Friday morning, instead pleading his case for a wildcard into the main draw.

Fellow Australians Alex De Minaur and Nick Kyrgios will play their Brisbane quarter-finals against Michael Mmoh and Alexandr Dolgopolov on Friday, while Dimitrov plays Kyle Edmund in the night session.

Denis Istomin and Ryan Harrison are the other quarter-finalists, with the only seeds Dimitrov and Kyrgios in the same half of the draw.