Konta holds off Tomljanovic in Brisbane

Ajla Tomljanovic pushed Johanna Konta all the way in an entertaining battle at Pat Rafter Arena before falling in three sets in the second round of the Brisbane International. 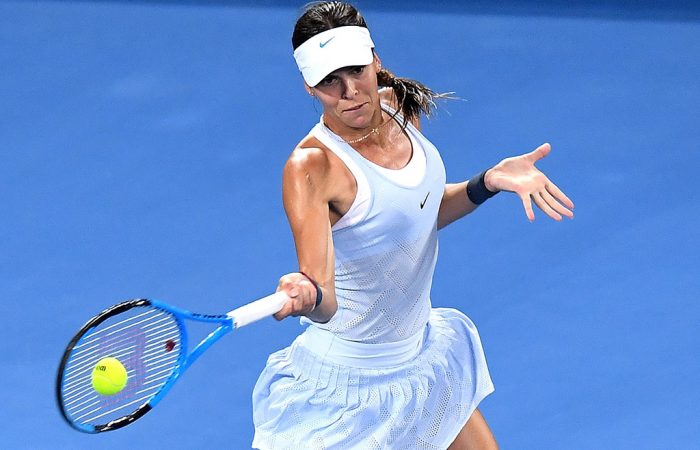 World No.9 Johanna Konta recovered from a sloppy first set to defeat a plucky Ajla Tomljanovic and move through to the quarterfinals of the Brisbane International.

It means there are no Australian women left in the singles draw after Ash Barty’s exit on Monday.

Konta will meet third seed Elina Svitolina of Ukraine or Ana Konjuh of Croatia in her next match.

She made 23 unforced errors in the opening set against Tomljanovic, which lasted for nearly an hour, but eventually found her groove against the world’s 118th-ranked player.

Tomljanovic: “I think my tennis is improving faster than my body, which is frustrating…. at the end of the day, this was a better night than being in a hotel room. I remember last year what I was doing was watching this on TV. So I've got nothing to be sad about.”

It was a battle between a former Australian and a future one – Konta was born in Sydney but moved to the UK with her family at the age of 14.

Tomljanovic, on the other hand, began representing Australia in 2014 and is based in Brisbane, but cannot officially represent her adopted country in WTA events until she receives gets citizenship.

The crowd at Pat Rafter Arena – which included her boyfriend Nick Kyrgios, who she has been practising with – was clearly on her side after she broke the 2017 Wimbledon semifinalist four times in the first set.

However, fifth seed Konta came out firing in the second and was up 5-0 when Tomljanovic took a medical timeout to work on an issue with her right adductor.

She returned to win the next game and broke Konta again late in the third set as she served for the match, coming from 5-2 down to within a point of parity, only to fall heartbreakingly short of what would have been a stirring victory.