Nick Kyrgios and Ajla Tomljanovic were all smiles as they took part in a practice session at Pat Rafter Arena ahead of the Brisbane International. 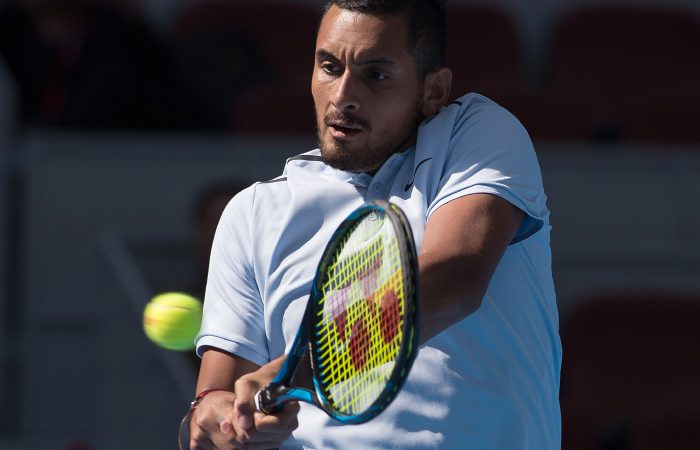 Nick Kyrgios may not have a coach but he seems to have locked in a hitting partner in girlfriend Ajla Tomljanovic after the pair traded groundstrokes at Pat Rafter Arena.

The pair have rekindled their romance in a reunion that has coincided with Tomljanovic’s strong return to the WTA circuit after more than one year out with a shoulder injury.

Kyrgios is adamant their relationship will only help both of them on court next year.

.@NickKyrgios has declared he's done all he can to prepare for an assault on the @AustralianOpen. @7Tennis #ausopen #7News pic.twitter.com/gEBgctcwO9

“It’s good to have her around and it’s good to see her healthy again. She was out for so long and she’s nearly top 100 again, so it’s a good achievement.”

The pair’s light-hearted hit finished with the 24-year-old Tomljanovic crunching several winners past the maligned Australian on Wednesday, who admitted he didn’t always let her win.

Kyrgios does not plan on adding a full-time coach to his support staff in 2018, with the Canberran intent on finding a mentor with his “best interests at heart”.

That hasn’t stopped him tinkering with his own game, with more emphasis on weights, a new diet and less basketball key to overcoming hip complaints that dogged his 2017 season.

“I haven’t got a coach; I will just go about my thing the same way I did this year,” he said.

“But I’m looking after my diet better, training a bit harder in the gym and doing a lot of rehab.”

Kyrgios will begin his summer at the Brisbane International from 31 December.

He is also set to appear at Melbourne Park for the Tie Break Tens exhibition on 10 January alongside former world No.1 Novak Djokovic before the Australian Open.