Patterson and Aiava to battle for AO wildcard 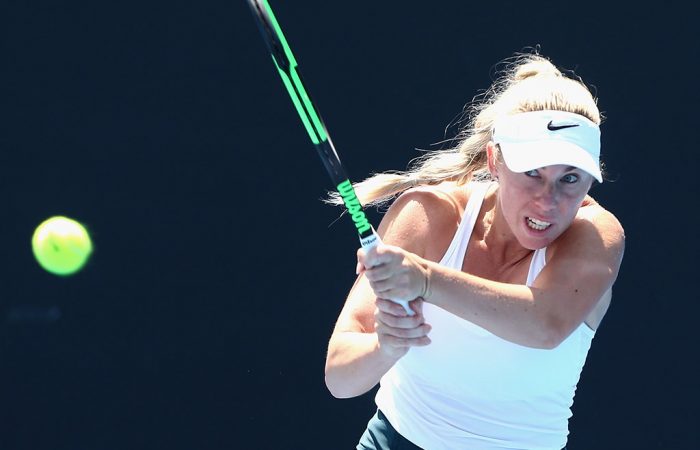 Doubles partners Destanee Aiava and Tammi Patterson will fight it out in the women’s singles final of the Australian Open Play-off on Sunday, after advancing to the big match under different circumstances.

No.3 seed Patterson saved a match point in the third against No.1 seed Arina Rodionova, before managing to scrape through from 3-5 down in the third set to win 4-6 6-3 7-5.

In the second semifinal, No.2 seed Aiava was too strong for No.4 seed Kimberly Birrell, winning 6-4 6-1.

The battle between Patterson and Rodionova could have gone either way, but at the right time Patterson’s strong serve and risky groundstrokes paid off.

She hit many a forehand or backhand winner close to the line in the third set and didn’t get tentative – which is how she wanted to play the game.

“I didn’t hold back, I’m not someone who is going to walk of the court knowing I didn’t go for it,” she said.

“My game style is pretty much if I think I can hit it, I’ll go for it, it doesn’t matter what score it is.

“I have to trust myself, and that paid off today.”

Patterson had a huge support in the crowd at Melbourne Park, after she urged her friends from the Royal South Yarra Tennis Club in Melbourne to come out and cheer her on.

In the end, despite a gruelling two hours and 14 minutes on court, Patterson – and her entourage – couldn’t wipe the smiles of their faces.

“It was such a relief to win at the end,” Patterson said.

“I knew Arina was going to be tough, she fights hard and never gives up.

“But I was really happy how I knuckled down when I needed to and got through with a win.”

As for Aiava, her serve and groundstrokes her spot on.

Whenever there was a danger moment – such as when she was serving for the match at 5-1 and ended up 0-30 down and break point down, she relied on her serve.

“My serve is one of my favourite shots,” she said. “I feel like I can get out of trouble a lot with it; it saves me under pressure.”

Aiava believes going into Sunday’s final and with all the match-play under her belt the past two weeks, she is in a good position.

“I felt pretty good on the court today,” she said.

“I felt like this was my best match I’ve played the past couple of weeks, I didn’t give anything away physically or mentally.