December Showdown: Poulos into 16/u semifinals

After advancing to the final of the 14/u Australian Championships, Annerly Poulos has continued her great form, storming into the semifinals of this week's 16/u event. 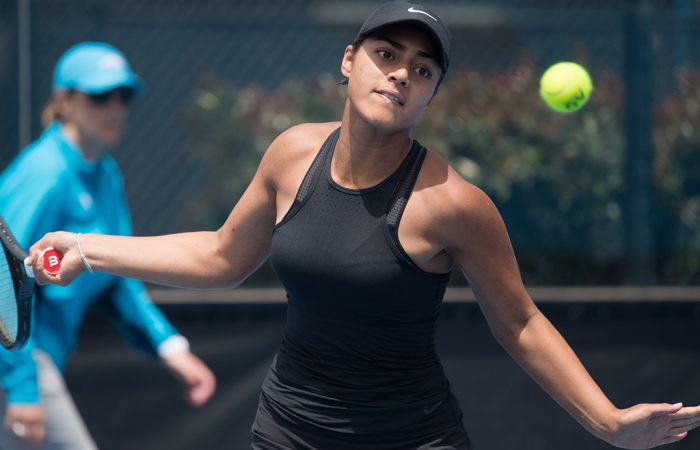 Canberra’s Annerly Poulos has continued her impressive run at the 16/u Australian championships, upsetting eighth seed Helena Spiridis to reach the semifinals.

Marshall beat No.6 seed Megan Smith for the loss of just three games on Friday.

Poulos came through qualifying for the 16/u event and then upset No.2 seed Olivia Gadecki in a third-set tiebreak in the second round, gaining revenge on the Queenslander for her loss in last year’s 14/u final.

Then came her win today over Spiridis.

“I’ve been in Melbourne (for December Showdown) for a long time, so it can be hard to keep going and maintaining your energy throughout every match so I’m just really happy I’ve made it this far in the 16s.

“I’m working with my coach, and one of the things I want to do is play a lot more pro-circuits to hopefully get my ranking up enough to start playing junior grand slams in 2019.

“I really want to start playing more difficult tournaments so I can start to get better experience playing different players, playing harder players, and learning and growing from all those matches to help me get ready for the future.”

In the other girls’ semifinal, fifth seed Zara Brankovic will tackle Natasha Russell after both won their quarterfinals in straight sets on Friday.

In the boys’ 16/u Australian Championships, three of the top four seeds have advanced to the semifinals.

No.1 seed Dane Sweeny beat Nikita Volonski 6-4 6-0 to set up a semifinal meeting with fifth seed Stefan Storch, a 6-2 6-0 winner over Tristan Schoolkate.

Meanwhile, second seed Ken Cavrak was stretched to three sets before subduing sixth seed Chen Dong while No.3 seed Rinky Hijikata raced into the semifinals courtesy of a 6-1 6-2 win over wildcard Mason Naumovski.

Cavrak and Hijikata will clash on Saturday, along with all the other 16/u semifinalists.