Gadecki overcomes Poulos in 14/u finale

Olivia Gadecki recovered from a set down to beat Annerly Poulos in the final of the girls' 14/u Australian Championships on Thursday in Melbourne. 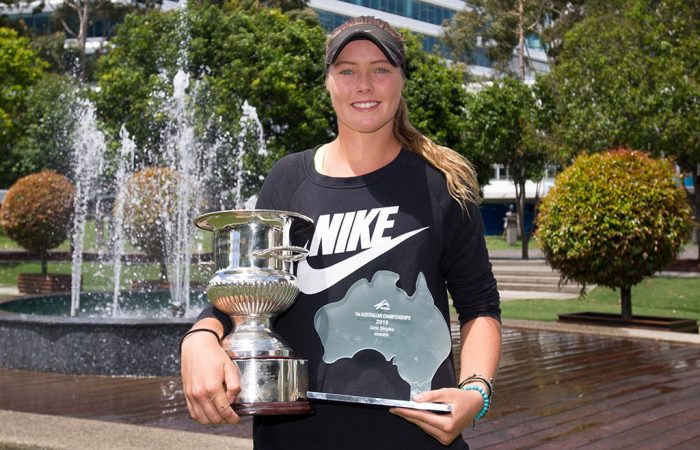 Top seed Olivia Gadecki broke through for the biggest title of her career with a hard-fought win over No.2 seed Annerly Poulos in the 14/u Australian Championships girls’ final.

The Queenslander said that having been in big national finals previously, it was nice to finally come away with the trophy.

“It’s a great feeling, actually. I can’t believe it. I’ve been in this position a couple of times and I just haven’t been able to finish it off. So it feels really good,” she said.

“I feel like I’ve done the work, and gotten a lot of experience. My game has really improved, and it’s finally showing in a big tournament.

“Last year I didn’t do so well, (felt) a bit of pressure, but I feel like I did really well (this time).”

Until the final, Gadecki stormed through the draw without the loss of a set.

And she responded impressively after dropping the first set. Landing an unreturnable serve to push ahead 5-2 in the final set, she benefitted from several Poulos errors to reach match point in the eighth game, and claimed the title with a backhand winner.

It is the second straight year Poulos has finished runner-up in the 14/u event.

“I feel like I was passive in the first. So then I tried to be more aggressive in the second and third, and it obviously paid off,” Gadecki said.

Gadecki’s elbow was heavily strapped, the result of soreness in previous weeks. Thankfully, it didn’t bother her this week at Melbourne Park.

Next on her December Showdown program is participation in the 14/u teams event, as well as the 16/u girls’ singles.

She’s targeting even bigger goals after having achieved national success.

“I want to be in the Aussie Open juniors next year,” she said.