Top seeds Cooper White and Anastasia Berezov are the Australian 14/u champions after winning their finals on Thursday at Melbourne Park. 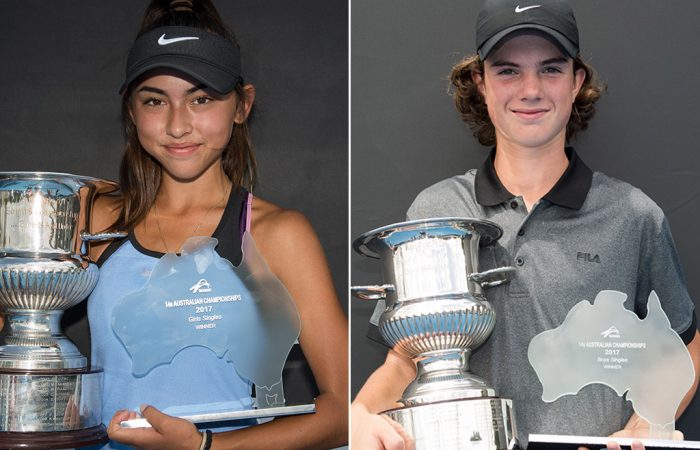 Victorian Cooper White and New South Wales’ Anastasia Berezov have won the 14/u Australian Championships on Thursday at Melbourne Park.

White, who was the top seed in the boys’ event, was too strong for No.2 seed Casey Hoole, beating the Queenslander 6-3 6-2.

White won many points from his impressive serve, and will be one to watch in coming years.

He said the win felt extra special after a tough few months as well as a toe injury.

“It’s been a tough year training wise,” he said. “I went over to Europe for a bit and didn’t come back overly confident with myself.

“I battled a toe injury coming up to this tournament, but thanks to all the physios they got everything sorted, and it’s an amazing feeling now.”

White didn’t drop a set all week, with his serve too strong for most of his opponents.

“I served really well, I don’t think my serve got broken which is great,” he said.

White, who has been training at Melbourne Park the past few weeks, said it had been an amazing week, especially as he has been sharing the courts with the Australian Davis Cup team who are participating in a training camp.

“I’ve been training here for a few weeks and all the Davis Cup players have been here and they have all been really big role models for me, it’s pretty good to have them around,” White said.

As for Berezov, who was also the No.1 seed this week at Melbourne Park, she had it much tougher, winning 7-6(2) 7-6(1) against Annerly Poulos, the No.2 seed from the ACT.

The two-hour match featured long rallies and was a contrast of styles, with Poulos’s power game matching up against Berezov’s consistent hitting.

Berezov, 14, will play the Australian 16/u championships next week as part of the December Showdown at Melbourne Park.

“I feel really amazing to win this time, because two years ago I lost in the final,” she said.

“It’s always very tight between us, so it’s good to come out with a win.

I’m really happy and I’m really proud of myself.”

Berezov will go into the 16/u event as a dangerous player after her successful week at Melbourne Park.

“It brings a lot of confidence to my game, so I’m really excited now about next week and how I will go,” she said.