Top seed Arina Rodionova was pushed to two tight sets by Sara Tomic in the first round of the Australian Open Play-off, while Kimberly Birrell ousted 2015 winner Maddison Inglis. 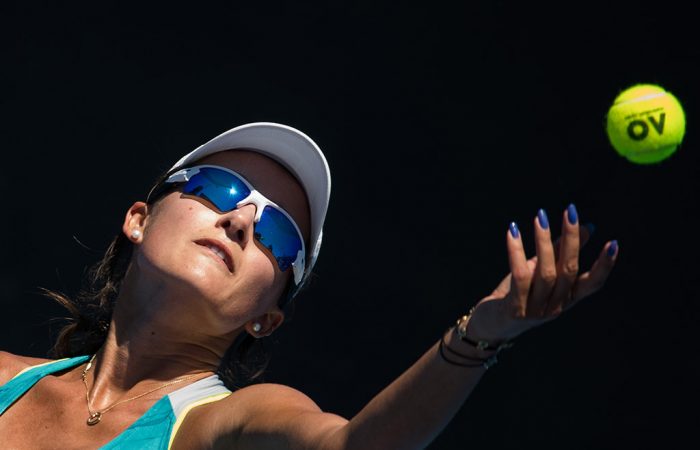 It was a battle, yet women’s No.1 seed Arina Rodionova made her way through to the second round of the AO Play-off with a tough 7-6(2) 6-4 win over Sara Tomic on Tuesday.

Rodionova, who finished the year ranked No.120 and just outside the automatic entry for a Grand Slam, said that although it wasn’t her best match she was glad to get through.

“I’m not peaking at this time of the year, but most of the other players are in similar conditions,” she said.

“I’ll just keep fighting for every point, and even though it’s not the best tennis, sometimes you figure out a way to win when you’re not playing your best.”

Rodionova made the second round of Wimbledon – where she came through qualifying – and the US Open this year, her best ever Grand Slam results.

She hopes this will give her a boost leading into 2018 – and a permanent position in the top 100.

“It gives me confidence, because I know I can play at that level,” she said.

“The Grand Slam tournaments are very special for us, and I’m very excited to be able to play a few more next year and hopefully do similar or maybe even better.”

Rodionova will play Olivia Tjandramulia in the quarterfinals after Tjandramulia completed a thrilling 7-5 6-4 8-6 win over Alison Bai.

However, it wasn’t to be for Rodionova’s sisters Anastasia, who lost to Alexandra Bozovic 6-3 6-3.

Birrell, who is rebuilding her game after elbow surgery and having 10 months off, said her time away from tennis just made her want it more.

“It was pretty rough when I had the time off because I had just finished school and I was pretty excited to start my career and then I had a bump in the road,” Birrell said.

“But it just made me want it even more, because I knew exactly what I wanted to do in my life.”

Birrell’s powerful groundstrokes saved the day in the third set, after she lost the second despite being 4-2 up.

Other winners on Tuesday included Naiktha Bains, Tammi Patterson and Zoe Hives. Later in the day, No.2 seed Destanee Aiava came out on top of a three-set, first-round battle with Masa Jovanovic.

The quarterfinals of the men’s AO Play-off will take place at Melbourne Park on Wednesday.