Rising stars Xinyu Wang and Soon Woo Kwon have won the Asia-Pacific Wildcard Play-off in Zhuhai - and will contest the Australian Open main draw in January. 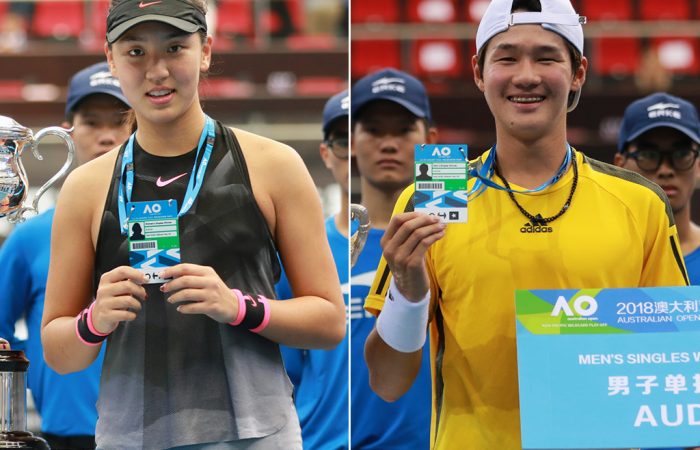 Ranked No.763 in the world this week, Wang is almost certain to be the youngest competitor in the singles main draw at the Australian Open next year.

In keeping with the theme of youthful success, the men’s play-off final saw top seed Soon Woo Kwon – who only turned 20 on Saturday – celebrated the biggest victory in his career so far.

Like Wang, he will make his Grand Slam debut in January.

“He played extremely well, I don’t have a chance at all.” Li said of Kwon’s near-flawless performance.

“I’m really happy that I could win,” said Kwon, who couldn’t hide the big smile on his face. “I went through some tough moments recently, so the win gave me something good to end the season on a good note.”

Asked if he would like to follow in the Uzbek’s footsteps and make some noise at Australian Open 2018, Kwon revealed he was eyeing a player we’re all very familiar with.

“I want to play Roger Federer in the first round,” Kwon said.

In the women’s final, Wang handed over the first set to her opponent with a dreadful dropshot error.

Tere-Apisah then once led 5-3, 30-0 in the second set and was incredibly close to making history for her country as the first player from Papua New Guinea to compete at a Grand Slam.

But it was not to be for the 25 year-old, who received a player grant from the Grand Slam Development Fund earlier this year. The momentum shifted and Wang, demonstrating fearlessness for her age, swiped the next seven points and going on to level the match.

“I told myself, it’s not the time to hold back, so I just went for my shots, and after that I was able to play more freely,” Wang said.

In the deciding set, both players gave their all, but it was Wang who seized the most crucial break with a splendid backhand passing shot in the ninth game.

She then closed out the final after saving four break points.

“It’s probably the most important day in my life so far,” Wang said in the post match news conference to CCTV sports channel, the official TV broadcaster of the Australian Open in China.

“I want to become an excellent player like Li Na and Zheng Jie (Zheng attended the presentation ceremony as an invited VIP guest). I will work hard to achieve this goal.”

With a big serve and hard forehand, Wang described her game as being quite similar to her idol, Karolina Pliskova.

“(If to play Pliskova in Melbourne) I will ask her for a photo together after we played,” Wang joked.