Barty as ambitious as ever after Newcombe Medal win

Ash Barty was back on the practice court the morning after her Newcombe Medal win, with an eye on a strong performance during the Australian summer of 2018. 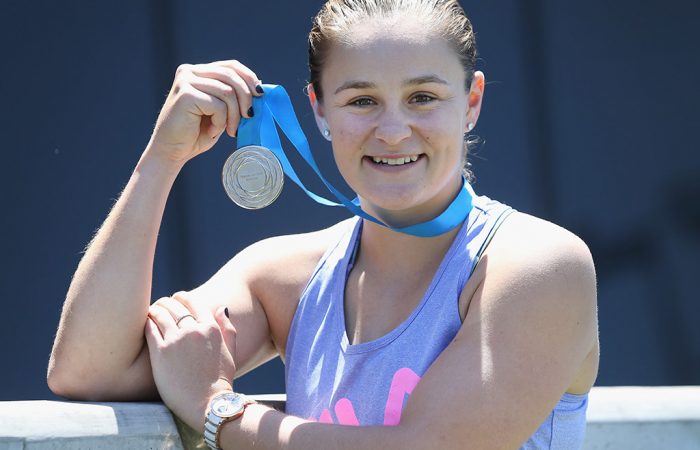 After winning Australian tennis’s highest honour – the Newcombe Medal – at Monday’s annual glittering ceremony at Melbourne’s Palladium Ballroom, there were no wild celebrations that extended into the night for Ash Barty.

Instead, the young Aussie – who capped her stunning season with the medal after soaring into the world’s top 20 in 2017 – was back on the practice court the very next morning.

“It was actually a very early night for me. We started here this morning training just before eight so it was a nice early night and back in bed before midnight,” she said on Tuesday at Melbourne’s National Tennis Centre.

The revelation shouldn’t come as a surprise, for it was similar hard work that has helped Barty in an incredible comeback to tennis.

Surrounding herself with team of genuine people whom she truly trusts, Barty made her return to singles after a 19-month absence in mid 2016 and enjoyed success on the ITF circuit. After a few injuries stalled her progress later that year, she was a force in 2017, slashing her ranking from No.271 to No.17.

The highlights were her first WTA title in Kuala Lumpur, finals at Premier-level events in Wuhan and Birmingham, third-round finishes at the Australian and US Opens and victories over top-tenners Garbine Muguruza, Venus Williams, Karolina Pliskova, Jelena Ostapenko and Johanna Konta.

Barty felt pushing then-No.1 Angelique Kerber to three sets in Brisbane “set the tone” for her season, which culminated with a productive swing through Asia and a campaign in Wuhan which she described as “a really good week, probably the best of my career.”

“I felt super comfortable on the court the whole year, really,” Barty said. “I think the match in Brisbane against Angie was a bit of a standout match – even though we didn’t come away with the win. I think towards the end of the year we were able to really get some good tennis, especially in Wuhan. And we were able to keep the ball rolling the whole year.

“I’m very lucky to be in the situation and position that I’m in. And we’re just happy to go out on the court to play with freedom and play the way that we want to play.”

Next year will obviously present challenges.

Barty returns to action in January not as a lowly-ranked, still-unproven singles player flying under everyone’s radar, but a top-20 seed with a genuine shot of reaching the second week – and front and centre of the Australian tennis consciousness.

Rather than getting overwhelmed, the Queenslander is choosing to embrace the occasion while maintaining a level, methodical approach that keeps her firmly grounded in the moment.

“It’s been an amazing year and sort of a milestone year I think for me. And we’re just really excited to start next year,” she said.

“It’s exciting (coming into the Australian Open as the top player). It really is. I love playing the Australian Open and the Australian summer. I can’t wait to get out in front of everyone and hopefully play my best. We’re very lucky to be a Grand Slam nation and get the support that we do … being able to spend the first couple of months in Australia.

“It’s hard to say now (if I’ll better my third-round run in 2017) as it’s still a long way away but we’re just focused on one match at a time and trying to focus on that match.”