Rogowska rolls on in Bendigo

Victorian Olivia Rogowska continues her impressive Australian Pro Tour form as the only Aussie to reach the semifinals of the ITF $60,000 event in Bendigo. 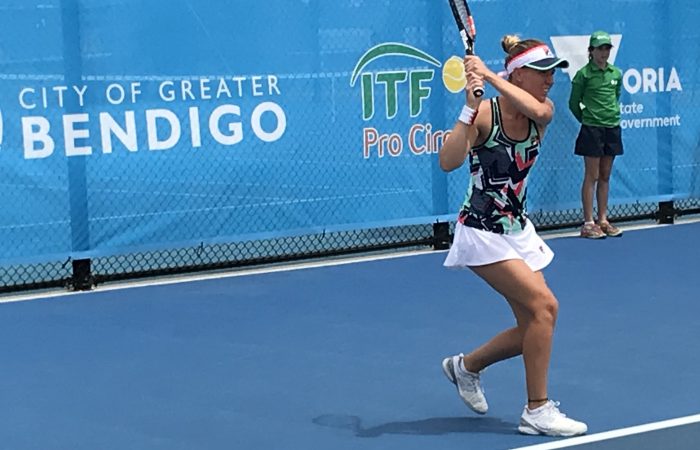 Olivia Rogowska is the only remaining Australian at the Bendigo Tennis International after reaching the last four on Friday.

The Victorian took her Australian Pro Tour tally to 22 wins from her last 24 matches after Tammi Patterson was forced to withdraw in the second set of their quarterfinal.

“It was a little unexpected,” Rogowska said of her close friend’s injury. “You don’t want it to happen.”

“The first set was really high quality. She came out firing and playing some really good tennis and I went down 3-0 pretty quick. But I played myself back into the match and it was a good battle from there.”

After winning titles in Penrith, Cairns and Canberra and climbing back inside the world’s top 200 (No.186), Rogowska, now 26, said her body and mind are holding up well to the rigours of continual match play.

“That’s actually the major difference this trip,” she said. “Usually I get pretty burnt out by about week three or so (of the Australian Pro Tour) but I’m still feeling physically and mentally really good. Hopefully I can keep it up.”

“I haven’t changed anything besides maybe being a bit smarter with my recovery, she added. “If you make your training good quality, not just hitting thousands of balls, then that’s enough. I think in the long run it’s really paid off.”

With an Australian represented in each of the quarterfinals in Bendigo, hopes were high on Friday for the hosts, but it wasn’t to be with top seed Arina Rodionova crashing out 6-2 6-1 to Abigail Tere-Apisah of Papua New Guinea.

Isabelle Wallace (No.7) and Sara Tomic were also unsuccessful in their semifinal bids, losing to Slovenian Tamara Zidansek (No.4) and Japan’s Mai Minokoshi respectively.

“Hopefully I can keep flying the flag,” Rogowska, who will face Tere-Apisah for a finals berth, said. “She had an unreal win today, so it’s going to be a tough one. I have to be ready.”