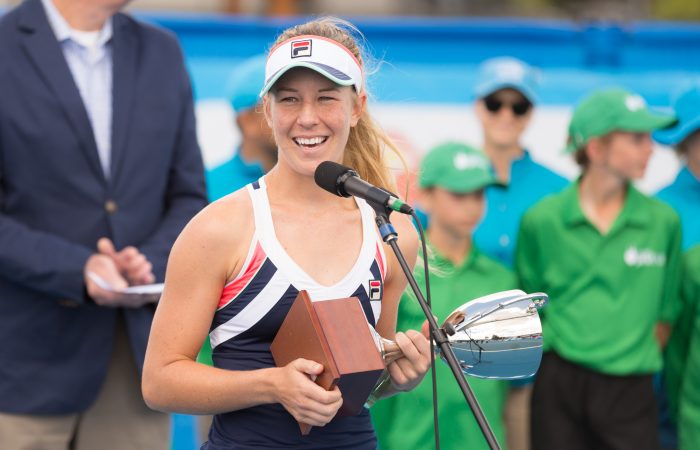 Olivia Rogowska has dispatched fellow Victorian Destanee Aaiva in under an hour to claim the Apis Canberra International title on Sunday, her third on the Australian Pro Tour in the past two months.

“I knew it was going to be really important to get a good start against someone like Destanee,” Rogowska added. “When she gets some momentum she’s very tough to beat.

“I started off well, playing solid and making her play all the extra balls that I could, and then I just kept my foot on the pedal. I didn’t lack any focus today, and I closed it off nicely.”

Rogowska, 26, has now won 19 of her last 21 matches on the Tour, including titles in Penrith and Cairns and a semifinal appearance in Brisbane.

“I’m believing in myself more now and I’ve matured a little bit,” she said of her current success. “I’ve become a bit more clear-headed on court and I’m focusing more on the things I can control.

“I’m going to keep taking it week by week, just like I have been doing these last seven weeks. There’s still one more tournament ahead of me and I’m feeling really good mentally and physically.

“I’ll soak it up today but then it’s back to business getting ready for Bendigo. Hopefully I can finish the year on a fantastic note.”

The win in Canberra marks Rogowska’s 15th Australian Pro tour title and will elevate her back inside the world’s top 200.

Local Canbreran Alison Bai should also be commended for her solid week, defeating top seed Arina Rodionova on her way to the semifinals, where she eventually lost to Aiava.

On Saturday, top seeds Arina Rodionova and her American partner Asia Muhammad defeated third seeds Jessica Moore and Ellen Perez 6-4 6-4.  This is the third time the pair have played together, winning the title in Bendigo last year and also making the semifinals of last year’s Apis Canberra International.