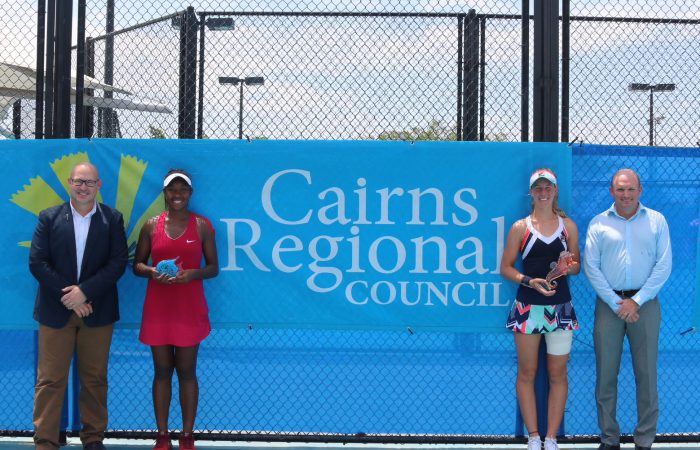 Olivia Rogowska has picked up her second title in the past month after defeating Abigail Tere-Apisah of Papua New Guinea to take out the Cairns Tennis International on Sunday.

Tere-Apisah, who was contesting her first Australian Pro Tour singles final, took the opening set with ease but was unable to continue her momentum as Rogowska’s experience kicked in and proved the difference. The 26-year-old Victorian eventually sealed her second straight Cairns title, 1-6 6-2 6-2.

“I wasn’t doing much wrong in the first set, Abigail was playing extremely well,” Rogowska said. “It was actually quite frustrating but I tried to hang in there and slowly I got myself back in the match. By the end I was playing some really good tennis.

“I worked out my opponents really well this week. I’m Just really proud with how I figured it all out. I played some smart tennis and I learned a lot.”

Alongside her recent Penrith title and a semifinals berth in Brisbane, Rogowska has found herself in somewhat of a purple patch.

“It hasn’t been my best year but to finish it off strongly like this is great,” Rogowska, the world No.224, said. “I’m really happy. It’s been a very successful four weeks for me and I hope I can keep it up.”

After her semifinal berth last week in Toowoomba, Ellen Perez continued her solid form making the quarterfinals before bowing out to Rogowska. Queensland’s Naiktha Bains was the other Australian to make the last eight.

Tere-Apisah and Bains both capped a solid week in Cairns after together taking the doubles title on Friday. The second seeds sneaked past the unseeded duo of Astra Sharma and Belinda Woolcock in a match tiebreak, winning 4-6 6-2 [10-6].