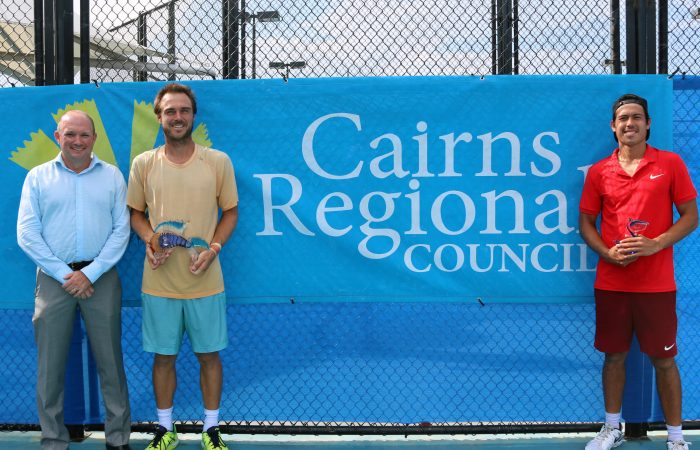 Victorian Dayne Kelly has turned the tables on Jason Kubler to take the Cairns Tennis international title on Sunday.

After losing a close semifinal encounter to the resurgent Queenslander last week in Toowoomba, the second seed was determined not to let history repeat itself and wrapped up an entertaining final 6-3 7-6(5).

“It’s a good feeling,” an elated Kelly – who won the inaugural event in Cairns back in 2010 – said. “It’s good to get another win on the Australian Pro Tour. It’s so tough to win these events so to get it done here is great.

“And it was nice to get a bit of revenge on Jason,” he added. “He’s been playing some serious ball, not only this week but his whole career really. He’s an unbelievable player and I’m sure now he’s up and healthy he’ll push on and do some great things.”

Kubler posted wins over Luke Saville, top seed Omar Jasika and Alex Bolt on his way to the final.

Seemingly unfazed by his own tough route to the final though, Kelly looked the goods early, snaring the opening set with relative ease, but Kubler raised his level in his second consecutive Australian Pro Tour final and surged ahead with a decisive break of serve at the start of the second set.

However, Kelly dug deep and managed to level at 6-6 after staving off two set points and again coming from behind in the tiebreaker with some excellent retrieving skills to earn a memorable victory.

“I’ll definitely take some confidence from today into the next few tournaments,” the world No.283 said of his ability to withstand the pressure coming from his opponent.

“I’ve been working really hard and trying to tick as many boxes as I can off the court. It’s definitely been my most successful year to date so hopefully I can keep going,” the 27-year-old continued. “Hopefully I can now guarantee some Grand Slam quallies for next year, that would be the goal, and then really start to push on from there.”