Nick Kyrgios has claimed arguably the best Davis Cup victory of his career with a five-set comeback over Steve Darcis in Belgium. 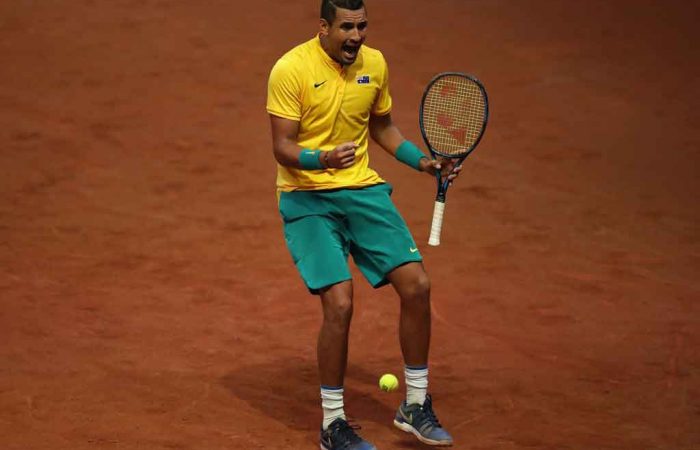 Nick Kyrgios has fought back to level Australia’s Davis Cup semifinal, seeing off a determined Steve Darcis in a five-set thriller in Brussels.

The crucial victory levelled the tie at 1-1 ahead of Saturday’s doubles rubber after David Goffin earlier beat a spirited John Millman.

Kyrgios stormed imperiously through the opening set, sending down eight aces without losing a point in five service games.

Darcis finally found a way to return the Kyrgios serve and broke in the second game of the second set and held on to level the match.

A titanic third set was decided in a tiebreaker after Darcis fought tooth and nail to save six break points in the fourth game, and a set point when 5-6 down before eventually taking the set.

However, the world No.20 silenced the crowd in emphatic fashion by taking the fourth set 6-1 as Darcis struggled to counter his huge serve, with Kyrgios saving a break point with 227kph ace.

Kyrgios continued to serve well in the decider, but Darcis managed to stay in the contest, saving multiple break points before succumbing on serve in the fourth game.

It allowed Kyrigios to see out the match to seal one of his best victories in an Australian shirt.

“The biggest thing for Nick was to stay in the moment,” Hewitt said after the match. “We had to turn the momentum around which is what they had after winning the second and third sets.

“I was proud of how Nick stood up early in that fourth set. He took the ascendancy, broke straight away in the fourth.

“That shuts up the crowd and the momentum swung back our way.

“The fifth set could have gone either way, but Nick hang tough on the big points and came up clutch and we were able to sneak away with the win.”

The world No.12 was made to work hard for his victory by the 185th-ranked Queenslander, who was only called into the team by captain Lleyton Hewitt on Thursday.