Jordan Thompson and John Peers remain alive in the men's doubles event as the US Open enters its second and final week in New York. 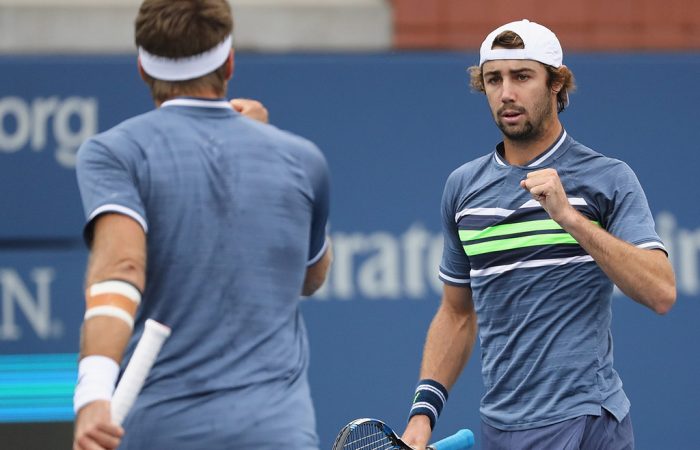 Aussies Jordan Thompson and John Peers remain alive in the men’s doubles as the US Open enters its second week.

Peers and Finnish partner Henri Kontinen, the No.1 seeds, continued their path through the draw with a straight-sets win over Russians Mikhail Elgin and Daniil Medvedev.

Peers and Kontinen, the reigning Australian Open champions, in the third round will tackle Juan Sebastian Cabal of Colombia and Argentine Leonardo Mayer.

Both Peers and Thompson are looking to join another Aussie, John-Patrick Smith, in the last eight; Smith and American partner Nicolas Monroe were given a free passage into the quarterfinals after opponent Fabio Fognini was suspended from the tournament.

They await the winner of the Peers/Kontinen v Cabal/Mayer match.

Meanwhile, Anastasia Rodionova is through to the mixed doubles quarterfinals after she and teammate Oliver Marach beat Jelena Ostapenko and Fabrice Martin on Sunday.

Yet her women’s doubles campaign came to an end when she and Nadiia Kichenok fell to No.1 seeds Ekaterina Makarova and Elena Vesnina in the second round.

Another Aussie, Daria Gavrilova, fell in the last 16 of the women’s doubles; she and Daria Kasatkina found Hao-Ching Chan and Zhang Shuai too strong, going down in three sets.