Millman into US Open third round

John Millman has continued his heart-warming comeback from another surgery, reaching the third round of the US Open for the first time. 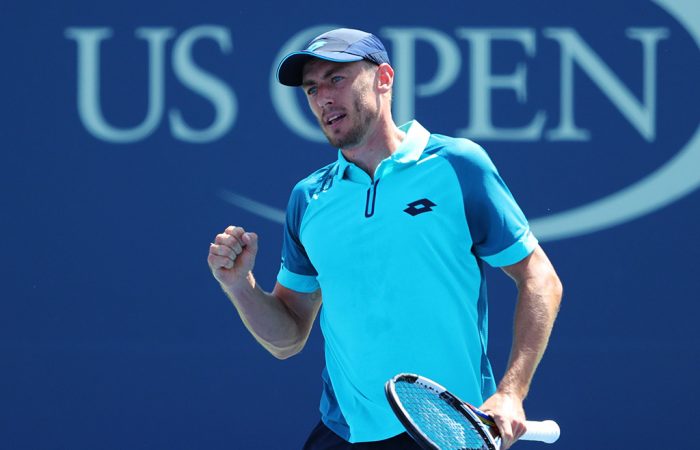 Australian tennis battler John Millman has continued his blazing US Open run to charge into the third round and earn himself the opportunity of a lifetime.

Australia’s last man standing backed up his upset defeat of Nick Kyrgios with a 6-1 7-6(1) 6-1 dismissal of Tunisia’s Malek Jaziri to make the last 32 in New York for the first time.

Millman next plays either German Philipp Kohlschreiber or Colombian Santiago Giraldo – both unseeded – for a $US144,000 ($A181,080) pay day and coveted spot in the second week of the season’s final Grand Slam event.

Contesting the Open on an injury-protected ranking, Millman’s progression is a huge result for the Queenslander in his latest comeback from surgery.

The 28-year-old, who has endured two shoulder reconstructions, a groin operation and countless other injuries in a career constantly stalled, arrived as the No.235 in the world.

He is now projected to soar at least 60 spots up the rankings, as well as earn a cheque for $US144,000 – more than doubling his season earnings – or possibly more.

Attempting to become the lowest-ranked player since 1985 to make the last 16 in New York, Millman showed no physical weakness from his four-set win over Kyrgios.

He struck 27 winners and broke Jaziri seven times in a victory that took exactly two hours.

“I knew that I would be playing in less than 24 hours time and that is a tough back up, especially with my body the way it is. It was unchartered waters for me,” Millman said.

“I haven’t really done the best-of-five back-up in less than 24 hours, so I was probably slightly apprehensive yesterday as to how my body would pull up.

“I am extremely happy with the level I am at and how I am hitting the ball. I am starting to play the big points better, which is really important when you are coming back from injury.

“Because when you have lacked that match experience, it is really difficult to be super clinical.”