John Peers and Henri Kontinen survived a match point to win through to the doubles semifinals at Wimbledon, while Ash Barty and Casey Dellacqua fell in a three-set quarterfinal. 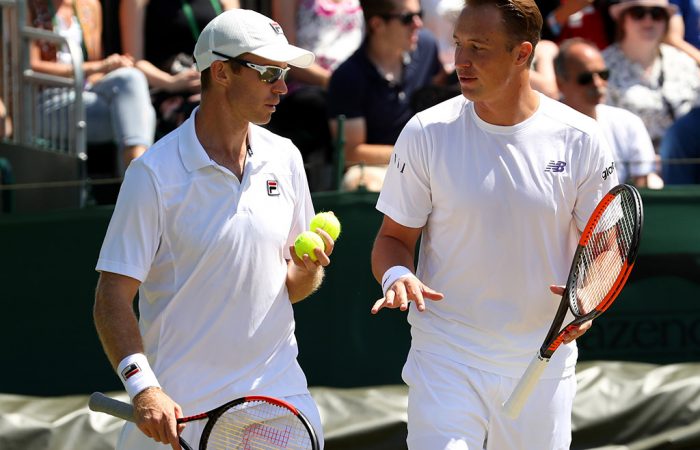 The Aussie-Finnish duo forced a volley error from Harrison’s racquet to save the match point in the fourth-set tiebreak and ran away with the match in the fifth.

Another Aussie winner at the All England Club was Blake Ellis, who reached the third round of the boys’ singles event with a 6-3 7-6(3) victory over Mexico’s Alan Fernando Rubio Fierros.

In the women’s doubles, Ash Barty and Casey Dellacqua were pipped in three sets by No.2 seeds Ekaterina Makarova and Elena Vesnina.

Peers said that the match felt no bigger than normal, despite the 2017 Grand Slam exploits of the two teams taking to the courts.

“You don’t really think about what people have done and what we’ve done. You just go out and play, and do what you can on any given day,” Peers said.

“And to be honest it was nice to be able sneak through that tiebreak and take momentum in our favour rather than let them win in the tight moments. Henri and I just kept saying to each other: stick to what we’re doing, and that momentum would change and swing our way at some point.

“They played a couple of good tiebreaks (second and third sets) and then we took the chance when we did, which was nice.”

Peers now stands one win from a return to the Wimbledon final after reaching the title match with Jamie Murray in 2015.

He and Kontinen next face No.4 seeds Lukasz Kubot and Marcelo Melo for a place in the final.

Following Peers and Kontinen on to No.2 Court were Barty and Dellacqua, who faced a tough assignment in the form of the reigning Olympic gold medallists.

“It was really just one break in each set, and yeah, I think as a whole, it was a really good match,” Dellacqua said.

“Lots of (proper) doubles on the court, and two good teams who I think think we’re gonna have a lot more matches against them in the future. I think they served really well and there wasn’t too much in it, I didn’t feel. And unfortunately we just didn’t come out on top today.

“But it was a really good, high-quality match.”

The quarterfinal exit drew a close to a sensational European swing for Barty and Dellacqua, who in five tournaments together won two titles (Strasbourg, Birmingham), reached two finals (Roland Garros, Eastbourne) and won 17 of 20 matches.

Ranked 19th and 21st respectively on the WTA doubles list, Dellacqua and Barty are currently fourth in the doubles Race to Singapore.

“We’ve certainly had an amazing trip,” Barty said. “And to finish here with another solid performance is a positive.”