Ash Barty and Casey Dellacqua won again to move through to the women's doubles quarterfinals at Wimbledon, while John Peers also reached the last eight. 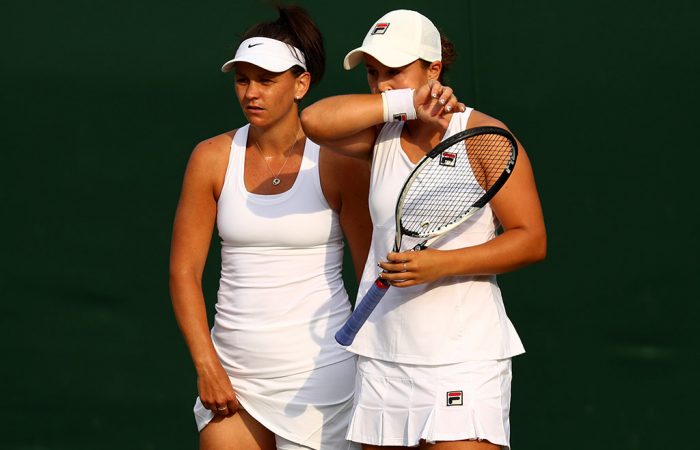 Ash Barty and Casey Dellacqua have continued their march through the women’s doubles draw at Wimbledon, winning through to the quarterfinals on Monday in straight sets over Elise Mertens and Demi Schuurs.

The No.8 seeds won 6-1 7-6(6) and will next take on second seeds Ekaterina Makarova and Elena Vesnina, the reigning Olympic gold medallists from Rio.

Peers and Kontinen, the No.1 seeds and Australian Open champions, line up in the quarterfinals against 10th seeds Ryan Harrison and Michael Venus, the winning pair at Roland Garros.

It was a winning day for Peers, who also advanced to the third round of the mixed doubles with Sabine Lisicki.

Barty and Dellacqua reached the doubles final at Wimbledon four years ago and are looking to keep their stellar grasscourt season going after capturing the title in Birmingham and finishing runner-up in Eastbourne.

“We’re really confident – we’ve had a lot of matches on grass, a few more than (Makarova and Vesnina) have. On our day we can beat any team in the draw,” Barty said.

“We were a set and a break up at 6-1 5-3 (against Mertens and Schuurs) and we were in control I think – we just got a little unlucky trying to serve it out. But it was just nice to come through. We did enough today to get through and give ourselves a chance for another match.”

After two three-set tussels earlier in the tournament, this was the Aussie team’s most comfortable match victory so far at SW19.

“I think at this stage of the tournament no teams are easy. I think we’ve had some good tough matches which is probably good for us going into the quarterfinals against another tough team,” Dellacqua said.

“I think it doesn’t matter how comfortable the scoreline is – at the end of the day hopefully you always come away with the win.”

Another Aussie, Sam Groth, bowed out in the third round of the men’s doubles.

Playing with Sweden’s Robert Lindstedt, the duo went down in four tight sets to Nikola Mektic and Franko Skugor.