Tomic wins, then loses in Eastbourne

Due to a rain-affected schedule in Eastbourne, Bernard Tomic was forced to play two matches in one day, and ultimately fell in the second of those to No.2 seed Gael Monfils. 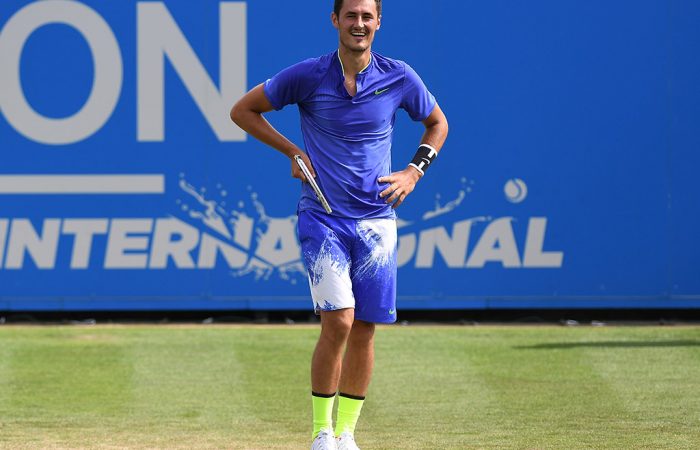 Battling Bernard Tomic enjoyed the best win of his stuttering 2017 season, beating Mischa Zverev on Thursday to advance to the quarterfinals at Eastbourne.

Then, later that same day, he lost in straight sets to Gael Monfils to exit the tournament.

Tomic, who has dropped to No.60 in the world after a poor first half of the year, downed sixth-seeded Zverev 6-3 6-2, but couldn’t back that win up against Monfils, falling to the Frenchman 7-6(4) 6-0.

The older brother of rising star Alexander Zverev, Mischa has had a breakout 12 months himself, beating Andy Murray en route to his first grand slam quarterfinal at the Australian Open.

But the 30th-ranked German couldn’t keep pace with Tomic in their second-round encounter on Thursday.

Tomic needed just a single break to take the opening set. The Australian lifted on both serve and return in the second set to claim another two breaks and the match in a breezy 51 minute performance.

It was the first time Tomic had beaten a player inside the top 50 in 2017.

It was due to rainy weather in Eastbourne that Tomic was forced to play two matches in one day; persistent rain wiped out the entire Tuesday schedule and forced an early end to play on Wednesday.

Monfils was also required to play his second round match and quarterfinal on the same day – earlier on Thursday he swept aside British wildcard Cameron Norrie 6-3 6-2 before beating Tomic in 66 minutes.

Monfils, the No.2 seed, will play fellow Frenchman Richard Gasquet for a place in the final.