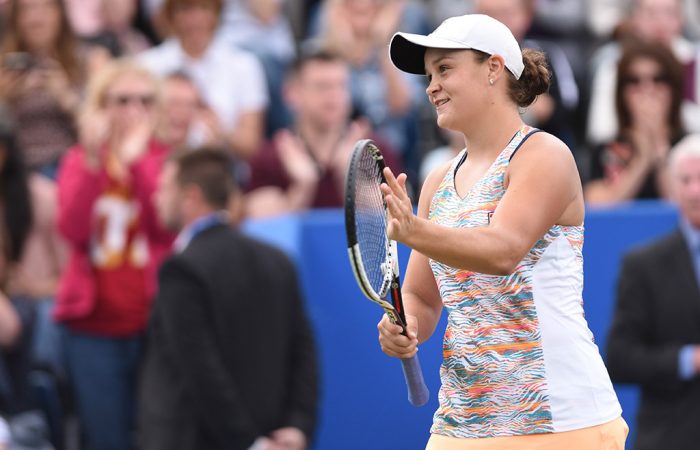 Ash Barty’s run to last week’s Aegon Classic final in Birmingham has sent the young Aussie rocketing up the rankings toward the top 50.

Barty vaulted 23 spots to a career-high ranking of No.54, an incredible rise given she ended last season outside the world’s top 300.

Barty is even higher in the WTA Race to Singapore, sitting in 25th position.

The race sees all players start the season with zero points and includes only ranking points earned at tournaments in 2017; the top eight players in the race qualify for the WTA Finals field in Singapore in October.

Barty was not the only young Aussie female making a move on the WTA list.

There were similarly impressive rankings improvements on the men’s side.

Thanasi Kokkinakis continued his rapid rise back up the rankings after an injury-plagued 18 months, soaring 220 places to 478th thanks to his stunning win over Milos Raonic in the first round at Queen’s Club last week.

In the past two weeks, Kokkinakis has scored singles wins in both ‘s-Hertogenbosch and Queen’s and lifting his ranking from No.993 to its current position.

Also on the move was Alex Bolt, who rose 132 spots to No.306 after advancing to the final of the Ilkley Challenger as a qualifier.

The man Bolt beat in the semis, fellow Aussie Sam Groth, lifted his ranking 19 places to return to the top 200 at No.187.

Jordan Thompson, who stunned Andy Murray on the same day at Queen’s that Kokkinakis enjoyed his breakthrough victory, rose four spots to world No.86.