Duo aiming to become first all-Australian women's doubles pair in half a century to reach all four Grand Slam finals. 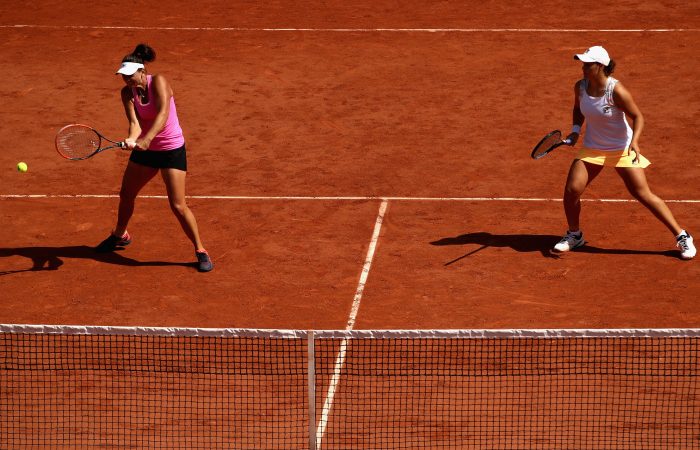 Comeback queens Casey Dellacqua and Ashleigh Barty are on the verge of accomplishing one of the greatest feats in Australian tennis history after surging into the French Open doubles semifinals in Paris.

Less than a year after returning to tennis from turbulent time-outs, Dellacqua and Barty are one tantalising win away from becoming the first all-Australian pairing to reach the women’s doubles final at all four Grand Slam events in half a century.

A 6-3 6-4 triumph over China’s Saisai Zheng and Romanian Irina-Camelia Begu has thrust the Fed Cup teammates into a showdown on Friday with Czech duo Lucie Hradecka and Katerina Siniakova for a place in Sunday’s title match.

Dellacqua’s bid to become the first Australian to complete a French Open “doubles double” since Wendy Turnbull in 1979 ended on Thursday with a 6-7(5) 6-3 10-5 semifinal loss in the mixed event with American Rajeev Ram.

But it is Dellacqua’s charge with Barty that is stirring emotions in Australia and threatening to rewrite the record books.

Only three other all-Australian combinations have made the women’s doubles finals at all four majors – and all three featured Margaret Court.

Court completed a women’s grand slam doubles sweep in 1970 with Judy Dalton and also reached the finals of all four in the 1960s with fellow Australians Lesley Bowrey and Robyn Ebber.

But win or lose, a French Open final appearance for Dellacqua and Barty would complete one of the most amazing comebacks in tennis.

After losing the Australian Open, Wimbledon and US Open finals in 2013 with Dellacqua – an historic achievement in itself – Barty took a a two-year sabbatical from the game and displayed her extraordinary all-round sporting pedigree with a successful stint in Australia’s Big Bash League cricket competition.

A Wimbledon junior champion at 15, Barty’s return to tennis has been stunning enough, the 21-year-old capturing her maiden WTA singles title this season in Malaysia as well as winning another two WTA doubles trophies with Dellacqua.

Australia’s top-ranked singles player before Sam Stosur’s record 452-week reign, Dellacqua was also sidelined for more than a year after being seriously concussed in an on-court tumble in late 2015. But the 32-year-old’s return this season has also been spectacular.