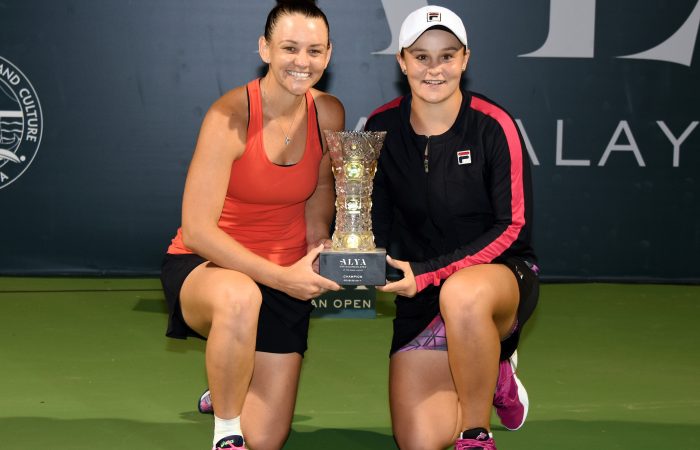 The popular Australians have resumed a partnership that took them to three Grand Slam finals in 2013.

They had last played together in 2014, before the 20-year-old Barty took a near two-year break from the sport. Dellacqua then combined with Kazakhstan’s Yaroslava Shvedova, reaching another two Grand Slam finals in 2015 and rising to a new career-high doubles ranking of No.3 in early 2016. But a severe concussion injury derailed 32-year-old Dellacqua’s career, restricting her to just 12 matches last year.

After contemplating retirement, Dellacqua returned to the tour in January as a full-time doubles player to partner close friend Barty.

“I am really excited to be back with Ash as a team, as we complement each other so well,” Dellacqua has said of the partnership.

The pair have combined to win nine of their 13 matches so far in 2017, including scooping their third WTA title (and first since 2014) at Kuala Lumpur in March without dropping a set. They also reached the Australian Open quarterfinals to improve their Grand Slam record as a team to 25-9.

Molik is impressed with how quickly Barty and Dellacqua, who currently sit at No.13 in the WTA’s Road to Singapore, have returned as one the world’s best teams.

“I think Casey and Ash will reach another Grand Slam final this year,” Molik, a two-time Grand Slam doubles champion and former world No.6 in doubles, said.

Barty and Dellacqua are likely to combine in this weekend’s must-win World Group II Play-off against Serbia – a partnership Molik believes is key to Australia’s Fed Cup chances.

“They’ve won a title already this year and it’s great for Casey that she’s had a full start to the season and that it’s been uninterrupted with injuries,” Molik said.

“From a doubles perspective, that is exciting for us as a team.”

The Australian team faces Serbia on an indoor hard court in Zrenjanin this weekend. The tie will be broadcast on 7TWO, starting from 10.30pm AEST on Saturday 22 April and Sunday 23 April.