Ash Barty is confident that she, Daria Gavrilova, Casey Dellacqua and Destanee Aiava can combine to deliver Australia victory over Serbia in this weekend's Fed Cup tie. 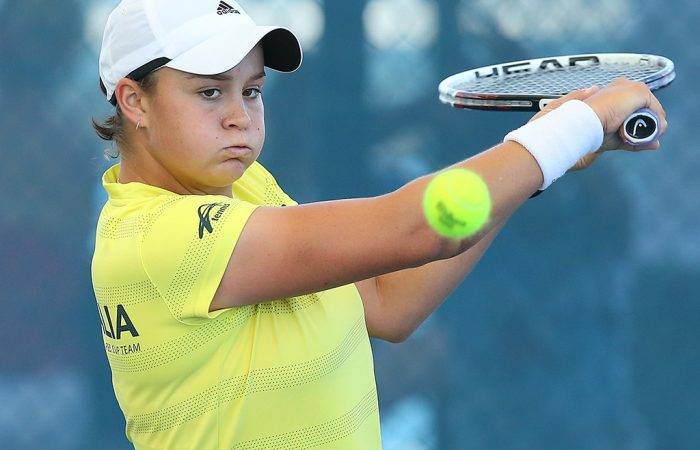 Ashleigh Barty and her Fed Cup teammates will be keen to assert Australia’s authority in their World Group II play-off tie against Serbia.

The clash in Zrenjanin, broadcast on 7TWO from 10.30pm (AEST) on Saturday and Sunday, will be the first time the two nations have met. Australia is looking to bounce back from a 3-1 defeat in Ukraine in February, and avoid dropping back to the Oceania zone for the first time since 2009.

It shapes as a busy weekend for world No.87 Barty, who is looking to continue her remarkable return to the court after a stint with Brisbane Heat in cricket’s inaugural Women’s Big Bash League.

The 20-year-old Queenslander is set to partner Casey Dellacqua in the doubles in addition to being on singles duty.

The team is rounded out by world No.27 Daria Gavrilova and 16-year-old debutante Destanee Aiava.

“It’s a big opportunity to get out there and play the Australian way. I’m ready to play any match. We have got a team where any person can play any position.”

Only Barty and Gavrilova have any first hand experience of the Serbian team, which is spearheaded by world No.119 Aleksandra Krunic.

The Moscow-born 24-year-old had three wins over Gavrilova in 2013 but lost in January to Barty at the Brisbane International – not that the Queenslander is reading too much into that result.

“They were completely different conditions,” she said.

“That game was as close as possible to playing in my backyard and I’ll be preparing as if the head-to-head is 0-0 and putting my best foot forward.”

Barty was full of praise for Aiava, who comes into the team on the back of ITF wins in Perth and Mornington in February and March.

“For us it’s just a matter of whoever (team captain Alicia) Molik and Pratty (coach Nicole Pratt) decide on the day.

“We feel very confident we can get the win – we’ve got to. You’ve just got to believe in and trust everyone in your team, and no doubt they will too.”