Nick Kyrgios has said that representing Australia at Davis Cup is crucial to him at this stage of his career. 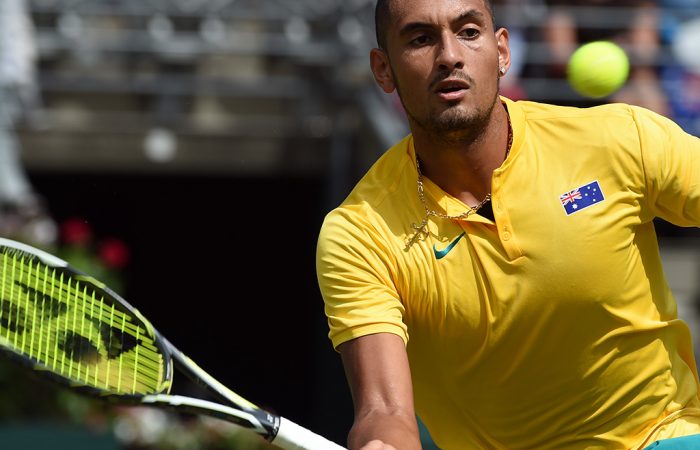 Nick Kyrgios says being back in the Davis Cup fold is crucial.

The world No.15 will lead Australia’s charge against the Czech Republic this week at Kooyong in his first match back since Australian Open 2017.

Following his second round defeat to Andreas Seppi, Kyrgios had said that he needed to find a coach. When questioned further in press about that, he admitted that he had a couple of potential coaches in mind but they needed to be the “right person”.

“It’s finding someone who has my best interest at heart and it’s tough to find someone on the team who’s willing to care about me as a person first,” Kyrgios said on Tuesday.

Davis Cup captain Lleyton Hewitt has ruled out taking on the role but appeared to fit the bill, with Kyrgios saying it helped him “100 per cent” having the former world No.1 in his corner.

Kyrgios said being a part of the Australian team environment was important to him.

“This week it’s good chemistry. It’s a good environment and makes me happy being with these guys and getting out on the practice court and training because usually when I’m by myself I struggle to find the motivation.

“These weeks are pretty crucial for someone around my time of my career.”

Kyrgios has spent the past 10 days in Miami training and was mostly over the knee injury which contributed to his loss.

He said he was also over the mental anguish, saying he had moved on thanks to the likes of Hewitt.

“I was obviously struggling, mentally it was tough but I’ve had a lot of support and obviously Rusty (Hewitt) has been helping me though it and I think this week is crucial for me to bounce back and go out to try to enjoy it again and I feel good.”

With no Bernard Tomic in the line-up, Kyrgios will be looking to get Australia off to a winning start.

Despite world No.12 Tomas Berdych skipping the tie, with world No.54 Jiri Vesely and veteran Radek Stepanek, who has been ranked as high as eight, the Czech team won’t be a pushover.

Jordan Thompson is expected to make his debut, with Australian Open men’s doubles champion John Peers teaming up with Sam Groth in the doubles.