Dellacqua and Barty earn No.1 reward

It was a busy day for Casey Dellacqua as the Aussie played twice with mixed fortunes at the Australian Open. 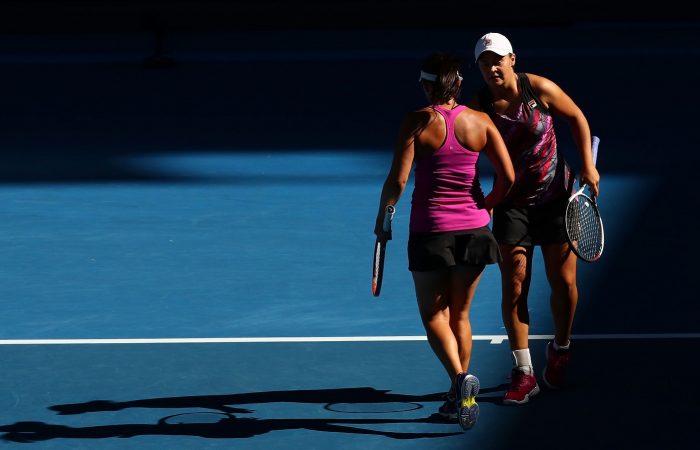 It was a busy day for Casey Dellacqua as the Aussie played twice with mixed fortunes at the Australian Open.

The duo, who made three Grand Slams finals as a pairing in 2013, sparked 34 winners to trigger five breaks and prevailed 6-4 6-4 over Anna-Lena Groenefeld and Kveta Peschke.

“Yeh, we’re really excited,” said an ecstatic Dellaqua. “We have been at the this stage of the tournament before but we haven’t played together in a long time at a Slam, so this is really exciting to be out here with Ash.”

Barty, who enjoyed a run to the singles third round at Melbourne Park, is clearly relishing playing back alongside her friend.

“I don’t know about my form but this one hasn’t missed a beat at all. It’s nice to come out here knowing I can trust Case 100 per cent, knowing exactly what she’s going to do, she’ll bring the best.

It’s great we’re being rewarded for our play,” said the 20-year-old.

“That’s always been the front of our doubles, going out there to have fun and enjoy it. Win or lose, we want to play with a smile on our face and leave it all out on the court. We can always go off without regrets.”

Reward for such progress, a match-up with No.1 seeds Caroline Garcia and Kristina Mladenovic .

So a couple of hours later and Dellacqua was back on court with fellow Aussie Matt Reid to take on the formidable pairing of Martina Hingis and Leander Paes. Unfortunately for the interests of the green and gold Hingis and Paes headed through 6-2 6-3 on Rod Laver Arena.

Over to the Men’s Doubles and fourth seeds Henri Kontinen and John Peers edged into the last eight following a thrilling contest.

Next up they’ll tackle a green and gold duo in the towering form of Sam Groth alongside Chris Guccione.

The big serving Aussies managed a 7-6(9) 6-3 triumph on a packed Hisense Arena over Marcus Daniell and Marcelo Demoliner.