Sara Tomic has advanced to the quarterfinals of the Australian Open play-off after last year's winner Maddison Inglis withdrew from their match with a stomach virus. 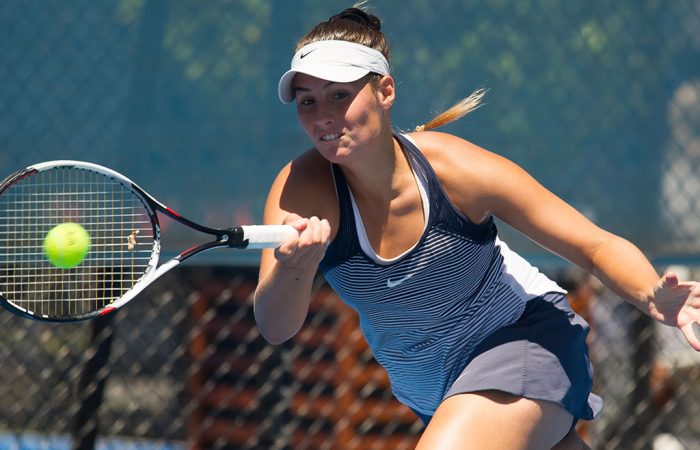 Maddison Inglis trailed Sara Tomic 4-0 in the opening set of their Australian Open Play-off match before being unable to continue due to a stomach virus.

The withdrawal of Inglis – who won last year’s Play-off when she defeated Arina Rodionova in the final – sends Tomic into the quarterfinals where she will meet No.2 seed Alison Bai.

Tomic, who lost to Inglis last week in the quarterfinals of the 18/u Australian Championships, said she’d learned from that match and changed her approach on Tuesday.

“I thought I played a very good four games – I was very aggressive from the first game and I think I played well,” Tomic said.

“It’s a shame she had to pull out. Hopefully she gets better soon.

“Last week it was a bit unfortunate on my side (against Inglis) … I learned that I had to be more aggressive and not give her too many short balls. I had to be on the ball and that’s what I did today.”

Tomic is the seventh seed in this week’s Play-off and arrives feeling fit and prepared after a solid training block at home on the Gold Coast.

During that time she enjoyed the opportunity to hit with brother Bernard, the men’s world No.26.

“Especially (on) the Gold Coast we have really good weather there, and today (in Melbourne) was very humid and hot. Yesterday was hot too so I was comfortable in the conditions,” she said.

“I definitely think I’ve worked hard; I’ve been working on my fitness a lot so I’ve gotten fitter and I’m moving faster. So it’s been a really good training block.”

Fourlis is backing up after a heavy schedule last week, in which she played six singles matches in as many days.

“Of course you always feel a little bit tired after six matches (in the 18/u tournament) plus a couple of doubles matches, but you just have to reset and start again. Can’t really focus on last week,” she said.

“Happy to be playing in the Play-off – it’s a great opportunity. Mentally and physically I’m feeling fine, and ready to go.”

“It was a great match today – a solid start to the tournament. She played some good tennis as well but I kept my head in the game and kept it together,” Fourlis said.

“I played solid tennis and mentally didn’t give up. Fought for every point.

One of the youngest players in an open field, the Victorian said that each player in the draw was capable of causing damage if they produced their best tennis.

“Anyone can win it – last year Maddy (Inglis) played the 18s, lost in the final, and then ended up winning (the Play-off). Hopefully this is round two,” Fourlis laughed.

“That would be a lovely feeling.”